Knightdale man set fire to own home before chase, exchange of shots with Raleigh officers 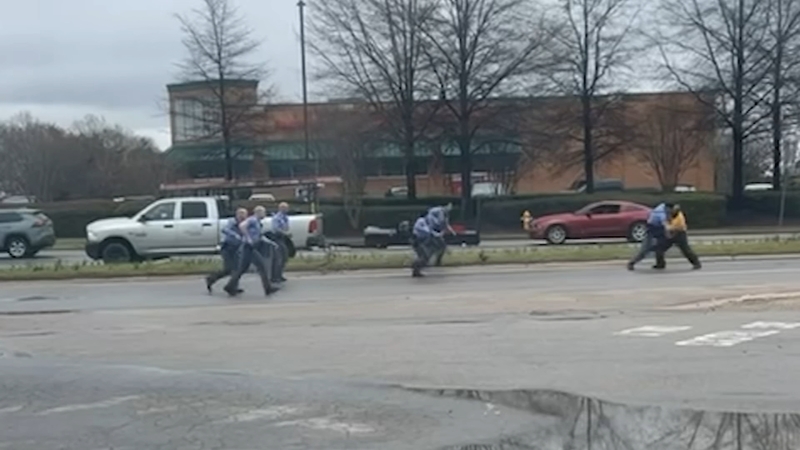 Police: Man set fire to own home before shooting at Raleigh officers

Raleigh police officers responded to a shooting call around noon in the 4200 block of Brockton Drive. They found a person shot. The victim was taken to a hospital with serious injuries.

Officers who responded then identified a vehicle matching the description of Daniels' vehicle.

We finally just got an update. In summary, @raleighpolice chased a car here because the driver was wanted in a shooting. The car they were chasing collided with another car. The suspect fired shots at patrol officers and they eventually wrestled him to the ground #abc11 pic.twitter.com/0w3DpZUkr7

After a short pursuit, the suspect vehicle crashed into another vehicle at New Bern Avenue and New Hope Road.

The suspect got out of the car and fired multiple rounds at officers, striking at least two patrol vehicles. Officers returned fire but did not strike anyone.

This is video of the shootout on New Bern Avenue this afternoon. 😯@raleighpolice say the man in the yellow shirt is charged with attempted murder and 3 counts of shooting into an occupied car #ABC11 pic.twitter.com/eTl9zL9Bgn

Officers also used Tasers in an attempt to take Daniels into custody, which they eventually did by tackling him to the ground.

"This senseless act of violence is intolerable," Raleigh Police Chief Estella Patterson said. "I am thankful for the courageous actions of our officers to safely take the subject into custody without incident."

No officers were injured. The occupants of the vehicle that the suspect crashed into were taken to a hospital for evaluation. They were treated and were later released from the hospital.

Knightdale police said the alarming saga started when police were dispatched to a "suspicious person" call at the Country Hearth Inn on Money Drive.

Witnesses there said Daniels went to the hotel and began knocking on several doors in an attempt to find his wife. When he was unable to find her, he left the hotel and returned to his home on Gaby Lane in the Cheswick subdivision off Hodge Road about noon.

Neighbors there told police that Daniels left his vehicle in the street and began shattering the windows of his home. He then set fire to the house before fleeing in another vehicle, witnesses said.

David Harris was in Knightdale visiting a friend for NCAA tournament, and they saw fire trucks. They walked inside and then heard sirens and then saw black smoke coming from out of the house

"It's a really wild story, didn't expect to see anything or hear anything connected to this person," Harris said. "It's just a very weird, strange circumstance.

"We just thought it was a fire," Harris added. "We saw a lot of people come out of their houses and it was kind of curious what was going on. We stayed out here around noon watching and everything."

Knightdale authorities subsequently learned that Daniels had fled into Raleigh, where the chase and exchange of gunfire with Raleigh officers eventually ensued.

Police from Raleigh and Knightdale linked the events together. Both agencies continue to investigate.

"The insanity of this series of events is beyond disturbing," said Knightdale Police Chief Lawrence Capps. "For the second time in as many days, the violent behavior of dangerous criminals has threatened the lives of our residents and first responders. Rest assured that our agency will do everything in its power to see that these individuals are held accountable for their violent actions."

Capps also said investigators have located Daniels's wife and child and confirmed they are safe.

The Knightdale Fire Department responded to Daniels' home and found the first floor in flames but quickly extinguished the blaze.

No one was in the home at the time, but the fire caused significant damage to the first floor of the house.