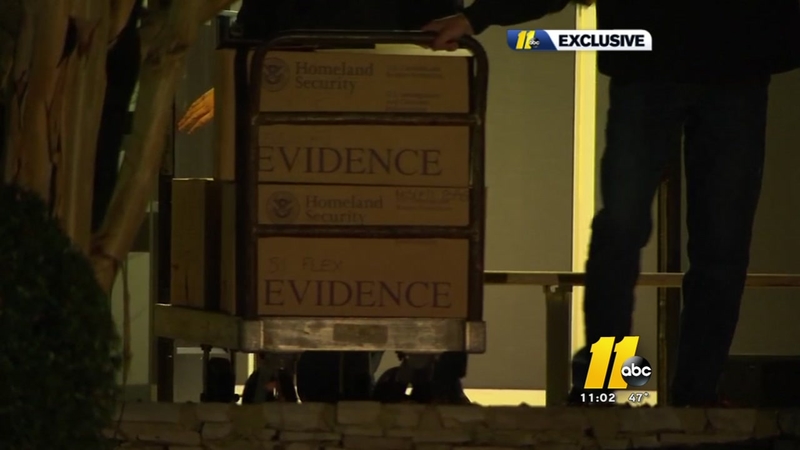 YOUNGSVILLE, North Carolina (WTVD) -- The U.S. Department of Homeland Security is confirming a daytime raid on a Franklin County-based company on Tuesday, executing a warrant on alleged "cross-border illegal activity."

By 6 p.m., several agents remained inside the business and told the ABC11 I-Team that they could be there well into the night.

According to its website, Bolma Star Services is a "full service contact center specializing in customer service and call center optimization."

Federal agents on the scene, however, told the ABC11 I-Team the company is involved in much more "illicit" activity.

While not confirming the exact nature of this investigation, agents explain HSI agents are often assigned to cases involving money laundering, trafficking, and cyber-sex crimes (prostitution and solicitation are generally state crimes instead of federal).

In addition to being a call center, DHS officials confirmed to the ABC11 I-Team that Bolma Star Services engages in "data farm" activities, hosting several computer servers storing files belonging to other entities, both personal and professional.

With the search warrant still sealed in federal court, officials could not elaborate more, but DHS involvement does signal both interstate and international activity.

In posted reviews on the website Glassdoor.com, former Bolma Star Services employees wrote "You have to operate within the legal limits of an industry in which it is hard to do so," and "If you enjoy looking at nude/semi nude models you will love it here."

The records warrant, filed by the U.S. Attorney's Office from North Carolina's Eastern District, remains sealed until HSI agents complete their initial investigation, which could last a few days after sifting through the boxes of confiscated files and computers.