WTVD
By Jonah Kaplan and Elaina Athans
RALEIGH, North Carolina (WTVD) -- A controversial compromise bill that replaces HB2 has passed the North Carolina General Assembly and has been signed by Gov. Roy Cooper. At a news conference Thursday evening, NCAA President Mark Emmert told reporters that the association's board of governors will have to discuss the new legislation before deciding whether they're comfortable hosting neutral-site championships in the state again.

HB142 cleared all of its hurdles Thursday in the General Assembly despite sharp criticism from activists and community leaders.

The vote came down to the wire before the state could have potentially lost the ability to host NCAA athletic championships for several years. The NCAA was one of many prominent organizations to sanction North Carolina in the aftermath of HB2, which was signed by Republican former Gov. Pat McCrory (R) last year.

HB2 was designed to block a Charlotte non-discrimination ordinance, part of which allowed transgender people to use bathrooms and locker rooms of the gender they identify with and required people to use the restroom according to their biological sex listed on their birth certificate in government buildings, schools, and universities.
HB2 had also restricted local governments' ability to enact nondiscrimination ordinances. Under the new measure, local governments can't pass new nondiscrimination protections for workplaces, hotels and restaurants until December 2020.

That moratorium, according to GOP leaders, would allow time for pending federal litigation over transgender rights to play out.

"I understand that Roy Cooper thinks that he's well intentioned, but this bill didn't offer any repeal of HB2. It still leaves our community being discriminated against and I don't think fixes the reputation of North Carolina," offered Chris Sgro, Executive Director, Equality NC.

And while the left wasn't happy with the deal, neither was the right. Republican Sen. Dan Bishop, a primary sponsor of HB2, denounced the new deal on the Senate floor, where it was approved 32-16, with nine of 15 Democrats among the yes votes.

"This bill is at best a punt. At worst it is a betrayal of principle," the Charlotte-area legislator said.

Democratic Senator Dan Blue said the bill takes North Carolina to a pre-2016 (HB2) state when it comes to public restroom use.

But LGBT rights supporters said Cooper should have held out for a full repeal.

"He could have done more to move Republicans on this issue to get around Tim Moore and Phil Berger because there was a coalition of Democrats and Republicans on that floor that would have voted for full repeal if he had really taken his case to the people of North Carolina instead of consistently sitting down at the negotiating table with people who don't have the best interest of the state of North Carolina in mind," Sgro charged.

At a news conference Thursday night, Governor Cooper said while the deal isn't perfect, he did the best he could given the situation.

"The Republican majority leadership had complete control on what went to the floor and what didn't, so they had to be the final arbiters on what was going to go on the floor," he explained.

That wasn't good enough for Sgro.

Senate leader Phil Berger said the compromise is just that: a compromise.

Conservative groups, such as the NC Values Coalition, also condemned the bill saying that HB2 should stand.

RELATED: Lawmakers reach deal with the governor on HB2

The Associated Press estimates that HB2 will have cost the state nearly $4 billion in lost business revenue over a span of 12 years.

The NCAA already removed championship events this year from North Carolina for the law known as the "bathroom bill", which limits LGBT nondiscrimination protections and requires transgender people to use public restrooms corresponding to the sex on their birth certificate. 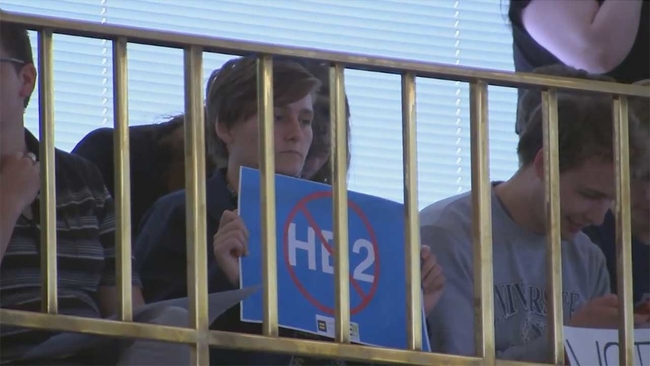 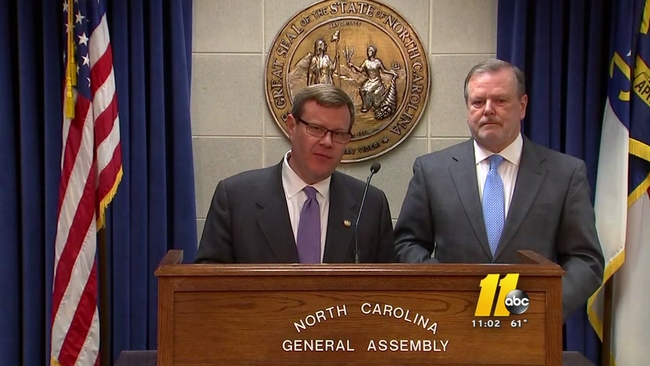 Lawmakers reach deal with the governor on HB2
HB2