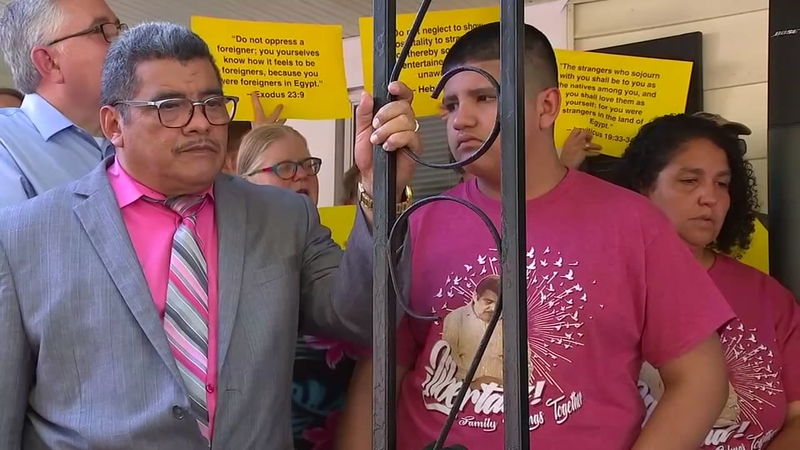 DURHAM, N.C. (WTVD) -- Thursday marked two years Jose Chicas has been living in sanctuary, as family, friends and local religious leaders gathered to meet with him on Saturday.

"To God's glory, I'm grateful for all the love and support that has been given to me and my family," Chicas said, via a translator.

Speakers delivered prayers and speeches, while mixing in song during the hour-long ceremony, which was followed by a dinner in the parking lot.

Happening now: A press conference to support Pastor Jose Chicas, who has lived in sanctuary at a Durham church for two years. He first came to the US in 1985, fleeing war in El Salvador. @ABC11_WTVD pic.twitter.com/mz0foXOxlD

"We're not alone. There are many families who are suffering. And we will not be silent," explained Sandra Marquina, Jose's wife, via a translator.

Marquina, who works in Raleigh, directed much of her anger towards the Trump administration, who supporters say pursued Jose's deportation order several decades after he was first detained.

"We're here to say that there is no mercy, that the leader of this nation has no mercy," Marquina said.

Chicas fled war in El Salvador during the 1980's, and was detained in Texas in 1985 after crossing the Mexican border. He was released on bail, but never appeared before his judge, citing faulty legal advice.

In the 1990s, Chicas pled guilty to DUI and domestic abuse in the 1990's, when he was struggling with alcoholism.

Supporters say he has since turned his life around, finding religion, leading a Raleigh congregation, and working at a local church prior to moving into sanctuary.

"Your faith and courage inspire us. And we promise this evening to be with you," said Rev. Julie Peoples, with the Congregational United Church of Christ in Greensboro.

In 2008, at the advice of his previous attorney, Chicas skipped an immigration court date where he was issued a final order of removal. That year, his application for asylum was denied.

"El Salvador is one of the poorest, most violent countries in the world with Guatemala and Honduras close behind. No one seeking a better life should be deported back to these conditions," said Rev. Mark Davidson, the pastor of Church of Reconciliation in Chapel Hill.

His church, alongside Chapel Hill Mennonite Fellowship, has provided sanctuary to Rosa del Carmen Ortez-Cruz, who fled Honduras in 2002 after facing domestic violence from her partner.