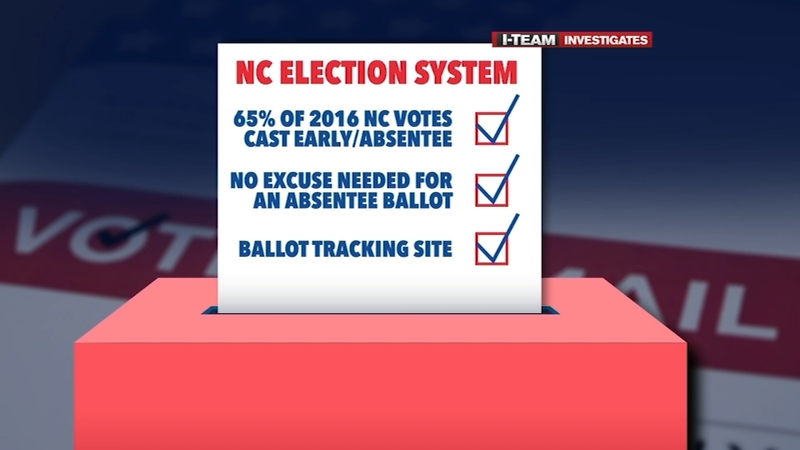 RALEIGH, N.C. (WTVD) -- As the 2020 election inches closer, concerns and arguments are being heard across the country over mail-in voting. Similar discussions occurred in Oregon two decades ago.

"People laughed and said it's not possible," said Phil Keisling, who served as Oregon's secretary of state when the state adopted a new voting system--one conducted entirely through the mail.

Keisling described the decision to conduct all elections through the mail in the state as a 'tortured path.'

"I can't tell you the hundreds of people who told me their initial reaction was, 'I hate this idea. I love going to the polls, the tradition of civic ritual,'" he said.

The system did eventually get adopted, and now, 20 years later, Keisling said the sentiment has changed.

"We have some of the highest turnout in the country, even when we're not a battleground. It saves millions of dollars and most of all voters heartedly approve of it. I think if you tried to take it away, you'd be run out of town with pitchforks and torches," Keisling said.

One-hundred percent of Oregon's 2016 general election votes were cast early and using mail, according to the U.S. Election Assistance Commission.

At 42%, the state had some of the highest turnout rates for the 2020 primary election, according to the United States Election Project. North Carolina, in contrast, had only a 28% voter turnout.

In Oregon's system, every voter gets mailed a ballot ahead of the election and voters have the choice of returning it either in person or through the mail. It's a system Colorado, Utah, Hawaii and Washington have adopted in recent years. Both Washington and Colorado reported high voter turnout earlier this year, based on the US Election Project's data.

Charlotte Hill, a policy researcher at the University of California at Berkeley, recently studied the impact of Colorado's voting system on elections. She and her colleagues uncovered voter turnout increased across the board.

"Turnout went up for everyone across the board but especially for the people for whom voting tends to be the hardest and put up the most barriers and the largest hurdles. Switching to a system where everyone got a ballot made it much easier for them to participate," she said.

Her work also found the increase benefitted both political parties equally. A finding, she said, that has been confirmed by numerous other studies.

She also said evidence of fraud in these voting systems is minimal.

"Switching to mail in voting can actually be a security enhancement because it creates a paper trail," she said. "There is always a paper trail you can follow to see if the way someone originally cast their ballot is the way that it was counted."

Oregon also has little evidence of voter fraud in its elections.

"We've built a system that is safe and secure," Keisling said. "Doesn't mean people don't do stupid things, even commit crimes sometimes, but there is so little risk that it is going to affect an election, particularly in a presidential year, that I think these things are just a distraction."

Keisling said its unlikely states attempting wide-scale mail-in ballots for the first time will instantly see the same benefits others states have. While many states, including North Carolina, are seeing an increase in mail-in ballots, election officials are simultaneously preparing for a regular in-person election.

"So they are kind of running two separate elections at once, with all the inherent maximum cost and maximum confusion and potential problems, so I think everybody is really nervous," Keisling said.

Hill said North Carolina already has some advantages over other states including offering multiple ways for voters to return ballots, not requiring an excuse for residents to request an absentee ballot, and offering a ballot-tracking site.

She said offering multiple drobox locations will further help the state decrease obstacles, but election officials also need to constantly remind voters of deadlines and information on how to correctly fill out a ballot.

Hill said it's too soon to see if this election will convert more states to a primarily mail voting system.

"There is a lot of change happening. A lot of people are trying new systems at the same time," she said. "They are doing it on a quick timeline, during a pandemic, during an election season that is struck by a lot of voter suppression, so I don't think anyone expects this election to run especially smoothly, which means it's not clear what lessons election officials are going to draw from this election."

Going forward, she does suggest states keep the voter at the forefront of election decisions.