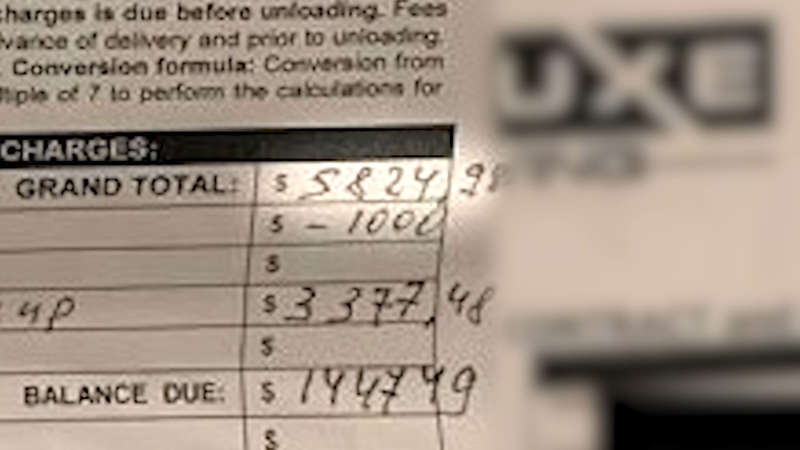 WAKE COUNTY, N.C. (WTVD) -- Some families in central North Carolina are facing a lot of frustrations after they were left without their possessions when they moved across the country to Wake County.

"A lot of stress, a lot of crying from the beginning," said Maria.

In April, she paid movers to transport her belongings from California to her new home.

"They've responded to me a couple of times. They said that the stuff was getting loaded on the truck in two or three days but this was like a month-and-a-half ago," she said.

While living in California, Maria and her husband received a binding moving estimate from the Florida-based company Alliance Moving & Storage.

When it came time for the move, the movers were a no-show on the scheduled date, and when they eventually showed up, just one man from Deluxe Moving, based out of New York, showed up, with a new contract, and the price for the move jumped from $2,500 to more than $5,800.

"Because we had already been pushed so close to our moving date, we felt like we didn't have any other options and just go with what they said," Maria said.

Maria said it took 10 hours for the one man from Deluxe Moving to get all of their items in the truck and their floor was damaged during the process.

Eventually, everything got loaded into the truck, and Maria, along with her husband, flew to Wake County and moved into their home in April, expecting Deluxe Moving to deliver everything.

However, it's now four months later and they're still waiting.

She said that when her husband calls Deluxe Moving to get an update, "they told him that they were loading the truck this weekend, and now they're saying that they're loading it in a week."

Frustrated without having any of their belongings, Maria contacted Troubleshooter Diane Wilson.

Wilson reached out to both companies.

Alliance Moving & Storage said it is just the broker, not the actual carrying company, and as stated in the contract, is not responsible for anything against the carrier. They apologized as the broker and said they continue to advocate for Maria. A representative added that because of this complaint and others pertaining to Deluxe Moving Group, Alliance has terminated its agreement with the carrier.

As for Deluxe Moving, after several attempts, Wilson finally got a representative on the phone, who said they're facing a driver shortage because of the COVID-19 pandemic, and they claimed their goods are in transit.

Hopefully, the movers come through but Maria is in the process of filing an insurance claim.

She is not alone. Wilson has heard from other families dealing with the same situation when it comes to their move.

To prevent this from happening to you, get several estimates. If one price is too good to be true, that's a red flag.

Next, do your research, read reviews and check that the mover is licensed. If you're moving within the state, contact the North Carolina Utilities Commission at (919) 733-7766 or online at to access their list of certified movers. You can also ask the Commission whether it has complaints against the company. If you're moving from one state to another, you can visit the U.S. Department of Transportation's website to find registered and insured movers and check for complaints.

Once you pick a mover, make sure you take a good look at the contract and get everything in writing, including the price and if it can change, along with the pickup and delivery date. Lastly, try and pay with a credit card to protect your move.
Report a correction or typo
Related topics:
businesswake countyabc11 troubleshootermovingcovid 19 pandemic
Copyright © 2022 WTVD-TV. All Rights Reserved.
ABC11 TROUBLESHOOTER
Is your home prepared for hurricane season?
Troubleshooter tops $6M recovered for viewers
Scam Alert: You will lose your AC if you don't pay up
Falling for this fake package delivery notification could cost you
TOP STORIES
Excessive heat warning issued for Triangle area
Explosion rocks mysterious Georgia monument
Two people facing charges in connection with Raleigh murder case
Husband of 'One Tree Hill' star, dead at 33 after lightning strike
James Caan, of 'The Godfather' fame, has died, family announces
Wake County homes left damaged by severe weather Wednesday
Griner pleads guilty to drug charges in Russian court
Show More
First case of monkeypox confirmed in Wake County
UK Prime Minister Boris Johnson resigns
Ex-cop to be sentenced on federal charges in George Floyd murder
Brad Pitt opens up about suffering from undiagnosed 'face blindness'
Surging child care costs force difficult decisions
More TOP STORIES News