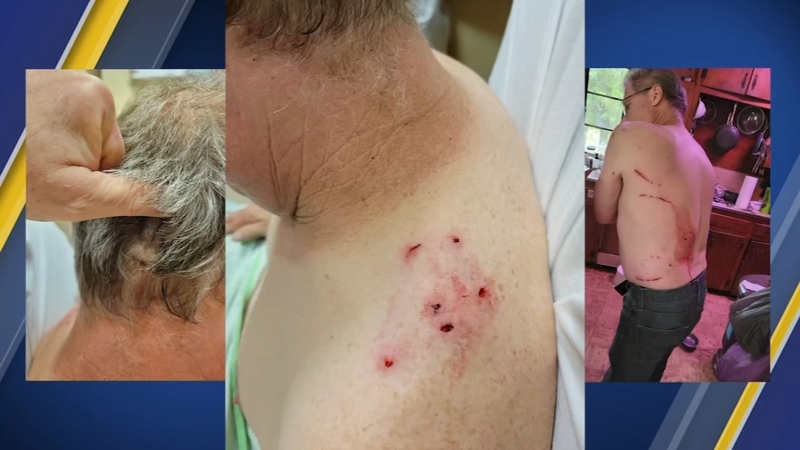 EASTWOOD, N.C. (WTVD) -- It's the bobcat's eerie growl that is still stuck in Scott Jackson's mind three weeks after being attacked by the animal outside his Eastwood home.

On June 4, Jackson and his wife, Randy, had just pulled up to their home with groceries. After Randy walked inside the house, Jackson remained outside, noticing his chickens acting frantic and running away from the car.

After seeing the chickens scatter, Jackson started hearing that growl and noticed a bobcat right underneath the back of his car where he was grabbing his groceries.

Jackson says he slowly backed away and turned around, "that's when he crawled on me and took me down on the carport."

With the animal on his back, Scott started fighting back, twisting the bobcat's paw until it let go. Scott then rushed inside the home until deputies arrived. By then, the animal was gone.

The short attack left some damage to Jackson's back and shoulder. He was dealt scratches and a notable bite mark on his left shoulder.

Randy tells Eyewitness News it could've been much worse for her husband, "the ER doctor and the deputies both said he was lucky to be alive, and I was lucky it went for him because I probably wouldn't be here."

The viral video shows a North Carolina man coming face-to-face with a rabid bobcat after it attacked his wife in their driveway.

The Moore County Sheriff's Office believes the bobcat was rabid. They tell ABC 11 that a homeowner, just a few miles away from the Jacksons, shot and killed a bobcat later that evening.
Authorities say the animal tested positive for rabies but couldn't confirm the two were connected; Jackson believes that's their attacker.

"I'm just a little shell-shocked. I mean, I've never had anything quite like that happen to me," Jackson noted.

The sheriff's office says bobcat attacks just don't happen in their community, telling us they don't have any previous recorded attacks on file.

He and his wife are thankful they and their livestock weren't injured or killed.