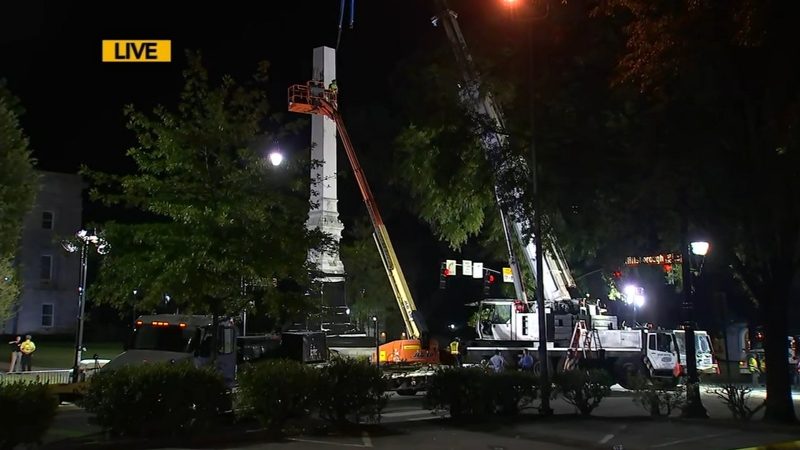 RALEIGH (WTVD) -- Crews worked late Tuesday night to haul off the last part of the 75-foot tall Confederate monument on the grounds of the State Capitol.

As of 11:30 p.m. Tuesday, the obelisk was removed from Capitol grounds by crews in downtown Raleigh.

The monument was put up in 1895 to honor fallen Confederate soldiers.

"This is a monument to slavery and human trafficking," said Kimberly Muktarian, president of Save Our Sons, who's been advocating in Raleigh for years. "This is also a monument to rape, pillaging and legalized gentrification."

Like Muktarian, Kerwin Pittman has been advocating in Raleigh for years.

He was in Raleigh Friday as two Confederate soldiers were ripped down and dragged through the streets of Raleigh.

Now he and others with Raleigh Demands Justice are pushing for real policy change.

"The statues being torn down is just a small arm of the bigger cause of what's going on," said Pittman, who believes the Confederate monuments should be put in a museum and not thrown away. "The root cause is policy change and accountability."

Raleigh Demands Justice wants police chief Cassandra Deck-Brown to step down. They also want more teeth to the citizens advisory board that's been set up.

In addition, they're proposing rerouting funds that would help the police and putting those back into the community.

"We need a seat at the table," Pittman said. "We want change and we are demanding change -- we're not asking for it."

Muktarian said it's important to stay focused on the matter at hand, which is moving beyond racism.

"We want to move to the utopia where one is treated fair and equal and not just say it but to actually put policies in place that represent all people so we can truly say 'All lives matter,'" she said.

Both believe the monuments should be put in a museum of some kind where they can be remembered and not put back up.