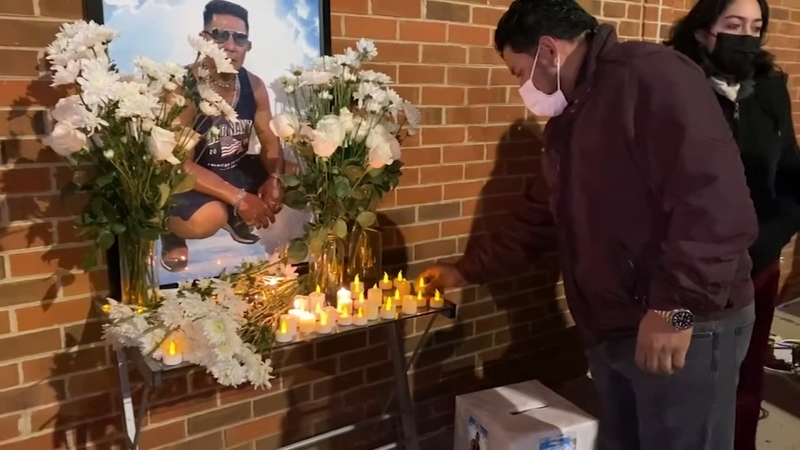 RALEIGH, N.C. (WTVD) -- In south Raleigh on Friday night, they lit candles beneath the portrait of Daniel Turcios.

His tearful widow, Rosa, spoke out publicly for the first time, the couple's three young boys by her side.

She described her husband as a loving father and the family's breadwinner.

Three days after Turcios was shot and killed by Raleigh police officers, his widow's message was that this is not OK.

"We have everything that we needed because of him," she said. "He was everything", she said. "My children, myself, are destroyed."

The family avoided any questions about the specifics of what happened on the shoulder of I-440.

A 911 caller during the incident, which was said to have started with road rage, said: "I'm going toward downtown, this guy is drunk, he flipped his whole car and ran me off the road."

911 callers identified Turcios as a drunken driver who crashed and rolled his vehicle. Police called to the scene of the crash tried to investigate whether he was intoxicated but after ignoring police commands, Turcios was tasered.

Turcios struggled with officers moments after recovering from the Taser shot and got up swinging. Some said he lunged at police with a knife. His family disagreed.

Friday's vigil focused on Turcios' life before those chaotic, deadly seconds on the beltline - and whether Raleigh Police followed its rules for use of force.

"The question has to be asked, could this brutal murder have been avoided?" Pittman said. "Could things have been handled a different way?"

Those gathered demanded transparency and accountability.

"It's not accountability of what RPD thinks is accountability. It's what his wife, his children and his family would like to see happen to that officer," said Andrea Hudson, a community activist.