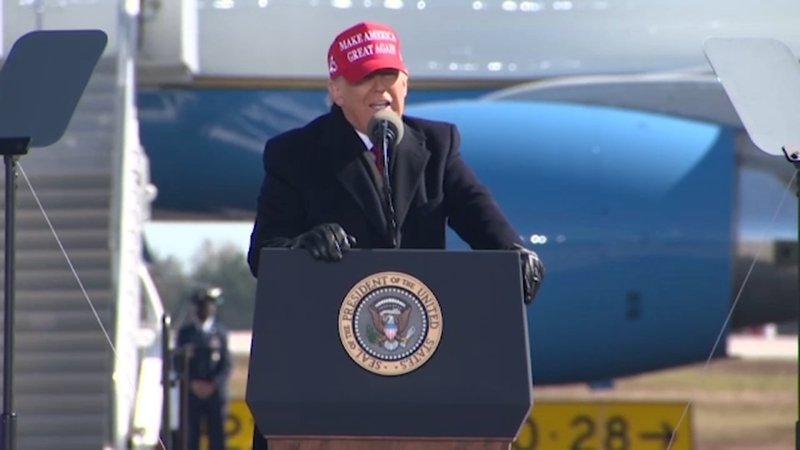 FAYETTEVILLE, N.C. (WTVD) -- President Donald Trump likely made his final stop in North Carolina before Election Day as his campaign stays on the attack with the polls opening Tuesday.

Trump held a "Make America Great Again" rally at the Fayetteville Regional Airport on Monday morning in an event rescheduled from last week due to rough weather. On Monday, he continued his campaign for re-election, trying to become the first Republican President since George W. Bush to get a second term.

"In 2016, North Carolina voted to fire this corrupt political establishment," Trump said. "If I don't sound like a typical Washington politician, it's because I'm not a politician. If I don't always play by the rules of the Washington establishment, it's because I was elected to fight for you and I fight harder than any other president has ever fought for his people."

It wasn't a typical Monday morning for Cary voter Stephen Young and his two kids. Instead of remote learning from home, Young thought a real life lesson in democracy was better.

"This is a historic event. It's good from them to see there's other people similar to us from all walks of life that believe in America and support our president," said Young.

President Trump kicked off his day campaigning in Fayetteville, North Carolina appealing to the military community.

"We invested $2.5 trillion in the military. We have the greatest equipment and greatest people," said President Trump. " You think that was easy to get from Democrats? Actually, the wall was easier."

With less than 24 hours until the polls open statewide, President Trump made a final appeal to voters like Raleigh resident Nzinga Johnson, who wore her Black voices for Trump hat. Johnson was confident this election will be another victory for him.

"I think he is rude, yes. I think he says things that you can consider mean. I just don't care that much. I want a man that will be in office that won't tell me what I want to hear that will do what he says he will do. Sometimes it's comical and funny," said Johnson.

The president warned supporters that Democrats could steal the election if absentee ballots are counted in the days following the election.

"What could happen during that long period of time is just a disgrace. Get your ballots in and have them in long before the third," said Trump.

After the rally, Trump has another full day on tap with speeches planned in Scranton, Pennsylvania, Traverse City, Michigan, Kenosha, Wisconsin, and Grand Rapids, Michigan. Democratic presidential nominee and former Vice President Joe Biden is traveling to Ohio and Pennsylvania on Monday.

Gov. Roy Cooper has been critical of Trump for holding rallies in North Carolina, linking them to the spread of COVID-19 in the state.

Sunday night, Trump made comments suggesting he might fire Dr. Anthony Fauci after supporters at his Opa-Locka, Fla. rally chanted "fire Fauci!" Fauci is the director of the National Institute of Allergy and Infectious Diseases.

"Even as his incompetence continues to hurt working families, students, educators, and small business owners in North Carolina, President Trump's only concern is winning this election," the Joe Biden campaign said in a statement regarding the most recent rally on Monday.
Monday's visit comes more than a month after Trump told a Fayetteville crowd he would fill the empty Supreme Court justice seat vacant after Ruth Bader Ginsburg's death. Amy Coney Barrett was officially sworn in as the Supreme Court's ninth justice last week.

The Republican campaign has made many stops in recent weeks in North Carolina. Trump spoke in Hickory on Sunday and Vice President Mike Pence spoke to voters in Elm City and Elizabeth City. A recent ABC News/Washington Post pollfound Biden to be leading by a slim 49-48 margin in North Carolina.