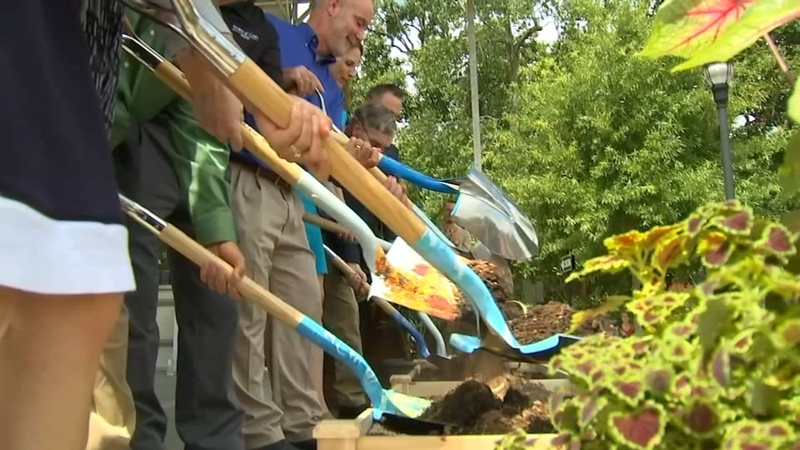 CARY, N.C. (WTVD) -- Cary boosters, including elected officials, spoke at length about planned improvements to the town's downtown park during a groundbreaking ceremony on Saturday. The six-acre park, the first of its kind in central North Carolina, will be built around Walker, Academy, Park and Walnut Streets.

Moments after they used shovels, decorated by local artists, for the symbolic turning of soil gathered from several locations in Cary, Mayor Harold Weinbrecht said, "We've been looking for this day for 20 years or more. So to finally have it happen, it's exciting!"

The urban park is a $50 million investment funded by bonds and will add another six acres to the existing one-acre park near the iconic water fountain.

"You know, cities are defined by their downtown! So this is very special," said Mayor Pro Tem Don Frantz.

The ceremony's part of Cary's celebration of its first century and a half of existence as a town.

"It's awesome to be doing it during Cary's 150th," said Frantz. "We look forward to coming back here in year 152 and cutting the ribbon!"

There's plenty of work remaining before that targeted 2023 completion date, work that significantly expands the footprint and features of the park that's getting the makeover.

"The old pump house that used to be here, that's gonna be relocated to a different place in the park," Frantz said. "So that's why we had to shut the area down, because we had to replumb the place, repipe it, all new pumps and everything. And they're gonna be hidden below ground."
Reminders of the original park, are still visible from the street behind restricted construction areas.

"We can already see that it's stimulating development in the downtown area, around the park and wider. We even see that this development extends beyond the downtown," said Joy Ennis, general manager of the Downtown Cary Park.

Plans call for "nature-inspired play" in the park, with a pavilion for performances, art exhibits and fitness classes. A "bark bar," dog park and children's play area are key features, along with elevated walkways over green spaces.