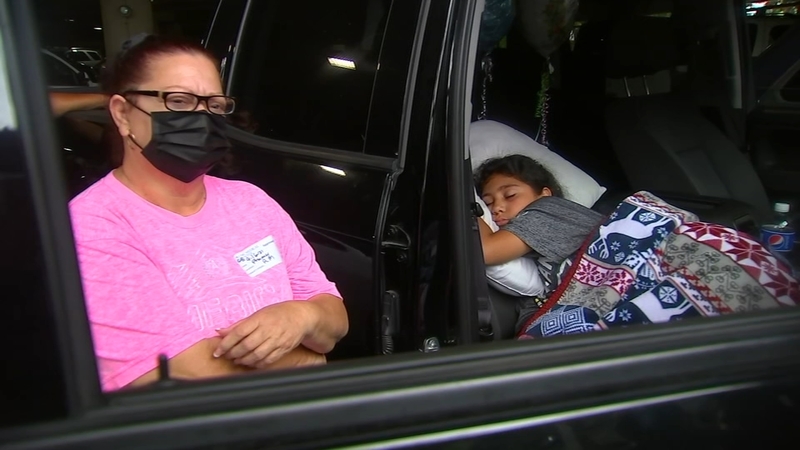 PEMBROKE, N.C. (WTVD) -- After spending four days at UNC hospital -- at one point unable to breathe on her own and partially paralyzed -- a Robeson County 9-year-old girl went home Thursday.

Meanwhile, a third person has been charged in the shooting that injured Estrella Sosa and her mother, Retona Sosa, in Robeson County last weekend.

Estrella was injured in the shooting that happened Saturday just after 10 p.m. off Moss Neck Road. Loved ones said the vehicle she was in was shot up as her family returned to their neighborhood in Pembroke.

Her grandmother Regina Maldonado said she witnessed her granddaughter crying out in pain.

Retona Sosa was shot in the arm, but her concern has always been for her children.

"My daughters are my life," Sosa said Thursday in an exclusive interview with ABC11. "To see her suffer like that. I wish every day that I could take the pain away. And just let it be me instead of her."

She said her gunshot injury is healing and she's "doing fine."

Still, she is trying to make sense of the gun violence in her neighborhood.

We've never had no problems with anybody. So why they would target us?" Sosa said. "I don't understand. Why it was us?"

Asked what was going through her mind when the bullets began to fly, Sosa said she was concerned someone might be killed.

"Mostly I was worried about my kids because when it started, I really didn't know what to do. We all panicked," Sosa recalled. "And then all of sudden, my oldest girl just jumped on top of her sister and held her down to try to keep the bullets from hitting her. And then I could hear my baby saying 'move Heaven, I can't breathe, get off of me.' She moved out from my daughter's arms trying to get in the front. I had my hand trying to pull her down; that's when the bullet struck me."

Sosa said Estrella, who is typically energetic and full of life now suffers from depression.

Earlier this week, the sheriff's office said it caught two of the people responsible.

Christian K. Locklear, 21, of Pembroke and a 16-year-old teen, of Lumberton, were arrested. Locklear is being held on a $1.5 million secured bond.

Both teens are being held in the Cumberland Regional Juvenile Detention Center.

Investigators said they are continuing to search for a 15-year-old who has been charged in the case.