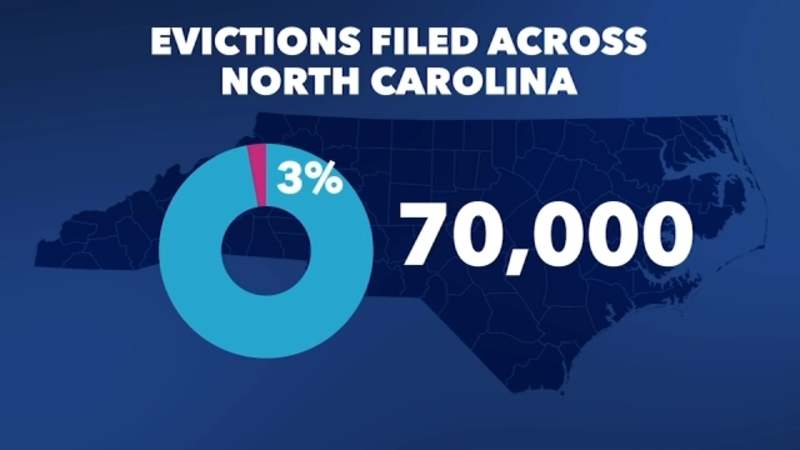 RALEIGH, N.C. (WTVD) -- It's the harsh reality of the COVID pandemic. Despite a CDC moratorium on evictions in place until March 31, Triangle families are still being kicked out of the place they called home.

"I just want people to know that during this pandemic the court system, NC is failing us; it's sad," said Tmeka Thorpe after being evicted from the Raleigh home she rented.

She said she was paid up to date on her rent, but her landlord chose not to renew her lease.

"I provided her with the CDC declaration form, and the courts ruled against me. I appealed...showing that I was a covered person, showing that this home was also considered a covered property, but I was still removed from the home with my judgment."

Thorpe's troubles started when her lease expired December 1 and her landlord exercised her right to not renew her lease.

"When I received the termination of the lease, I still attempted to pay her into the court date. I asked for an extension. I asked, 'Can you just work something out? It's in the middle of a pandemic.' She said, 'I can't take any money from you, because I'm taking you to court,'" Thorpe recalled.

Thorpe tried to prove her case in court, but despite several appeals she lost. The judge ruled her case a holdover, which means her lease expired and the landlord can opt to not renew. A Do Not Enter Notice was put on the home Thorpe rented, and she was evicted. Now lives in a hotel with her kids as she looks for a new place to stay.

"I'm speaking for everyone else, every other family that I see at that hotel putting their kids on the school bus."

Thorpe is not alone as during the COVID pandemic, close to 71,000 evictions were filed in North Carolina courts between March 2020 and February 2021.

Despite the eviction moratorium in place, data shows since July half of the evictions in North Carolina have been granted. Judges denied only 3% of evictions and 11% were involuntarily dismissed.

"The problem is the CDC moratorium does not protect against holdover evictions." Since we are a year into the pandemic, leases are up, and landlords are taking action to circumvent the moratorium. "I fear this is going to be the move forward," McCoy said.

He said when the eviction moratorium expires, the courts will be filled with even more eviction filings for non-payment of rent.

"The problem is the deficits, and because the deficits far exceed what they are able to pay for now. We have a concern that a lot of the units people...have been housed in through the moratorium are going to be deemed untenable. So if you can't pay off the deficit and the landlord can even prove you owe $1 in rent they technically are entitled to their eviction action," McCoy added.

The ABC11 I-Team analyzed eviction data across North Carolina for the past year to uncover more evictions occurring in counties that tend to be poorer and home to Black and Latino populations.

The top 20 counties for evictions report rates three times higher than the bottom 20 counties. The percent of nonwhite residents in these top counties is also on average more than double the percent of counties reporting the fewest evictions.

"Evictions prior to COVID were disproportionately minority." However, McCoy said the pandemic has impacted more than just the lower-income communities.

"We saw a lot of people prior to COVID considered middle class, folks who were big-time RTP engineers and all of a sudden couldn't work because of the shutdown and they too were at risk of being evicted," McCoy said.