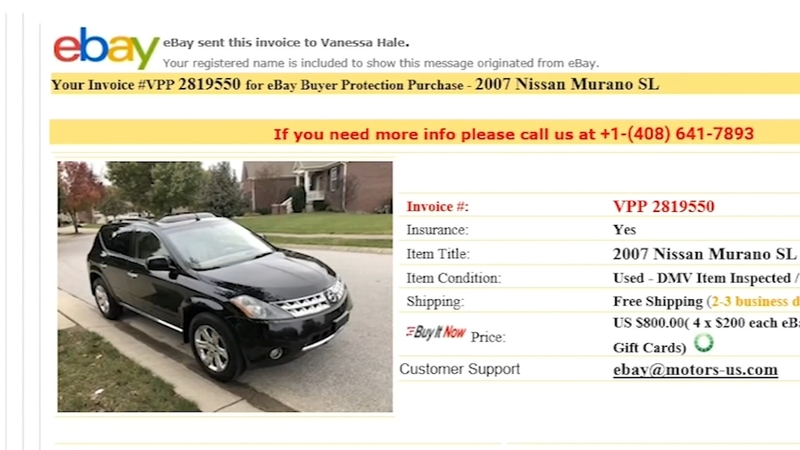 Gift cards are one of the most popular gifts to give, but more and more, gift cards are being used as the No. 1 tool for scammers.

Vanessa Hale learned that the hard way after losing $800 to a gift card scam.

"That was all the money I had left, but I was trying to help one of my children," Hale said.

It started when Hale responded to an online ad for a used car. She thought the purchase was protected through eBay Motors.

"I mean the logos and everything was just like eBay," she said.

"I just want people to be careful because this really threw me for a loop, it really did," Hale said.

eBay does have warnings on its website about this scam. Even though the seller claims the deal is protected by eBay Motors, it's not, as they just use eBay logos to make it appear that way.

Hale is not alone, Troubleshooter Diane Wilson continues to hear from victims who paid scammers in gift cards. A Holly Springs woman who lost $16,000 after she bought that much in gift cards after getting an email from a scammer claiming to be with Amazon.

When it comes to those behind this scheme, AARP spokeswoman Kathy Stokes said they are often businesses operating this sophisticated scam.

"They buy and sell lead lists, they give bonuses when employees on the desk make a scam," Stokes said. New research from the AARP Fraud Watch Network shows 1 in 3 adults said they or someone they know has been asked to purchase a gift card to pay a bill or some other obligation. The research is a part of a three-year effort launched Friday to stop gift cards from being used as a tool for criminals to steal money.
As soon as victims read the numbers off the back of the card, the money is gone.

"They can convert it into cash, cryptocurrency, they can use these gift cards to move money around and stay outside the traditional banking system where otherwise, these numbers might show a red flag," Stokes said.

Remember, gift cards are meant for gifts, not criminals. Many retailers are also working to stop the fraud by limiting the amount of gift cards you can buy at one time, and also having employees ask to make sure you buying the gift cards aren't part of a scam.

If you're asked for payment in gift cards, more than likely it's a scam.