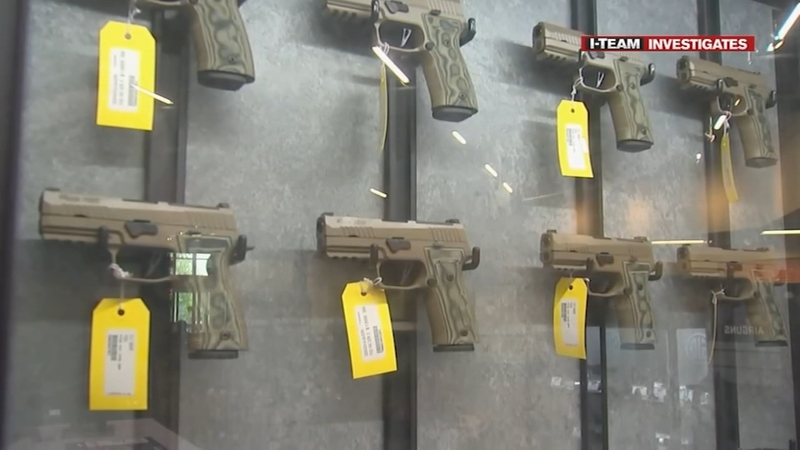 This type of gun is confiscated the most in Wake County

Despite the pandemic, 2020 marked a deadly increase as 27% more people died in North Carolina from shootings than the year before, according to data from the Gun Violence Archive.

So far this year, shootings have injured nearly 900 people and killed more than 500 statewide, based on data from the Gun Violence Archive.

As lawmakers and advocates across the country call for changes to gun laws, the ABC11 I-Team requested confiscated gun data from the Wake County Sheriff's Office. The data revealing handguns are involved in the majority of crimes and are responsible for the most deaths.

Data from the Wake County Sheriff's Office revealed deputies have confiscated more than 3,200 guns since 2016. These weapons can be obtained as evidence following an incident, collected in connection to another crime (such as drug-related offenses), or as a result of someone filing a domestic violence protection order.

During the past five years, approximately 62% of the guns obtained by the agency are handguns. Fewer than 1% are labeled as AK-47s. The most common makes including Glock, Smith and Wesson, Ruger, and Taurus.

"It's not hard for handguns to end up in the wrong hands, and that's what we are seeing," said Wake County Sheriff Gerald Baker.

Some of the most common guns the agency stores are also the easiest to obtain and best guns for beginners.

Not all the guns at the agency have been directly linked with a crime. About half are associated with a crime, the most common is aggravated assault. Other common charges include weapon violations, calls for service, suicide, and drug-related offenses.

"Every time a gun is present then that elevates what could maybe appear as the simplest crime to a whole 'nother level," Baker said. "It's always going to change everything. Nothing is simple anymore if there is a weapon involved."

Of the 105 guns linked with murder charges, two-thirds are handguns.

"We've got to look at what's happening all over the country. Young children shooting each other, the robberies, the homicide. All those things being done by the use of these handguns," Baker said.

This data is consistent with trends across the state. Fifty-eight percent of murders throughout North Carolina in 2019 involved handguns, according to data from the FBI.

Around 54 of the confiscated weapons were reported as stolen. Baker said people are breaking into homes and cars to illegally obtain guns. He urged gun owners to purchase a safe. Many of the stolen guns were linked with drug offenses and weapon violations.

After the Sheriff's office obtains the guns, the outcome of the weapons usually depends on what a court orders. The weapons can be held for evidence, returned to the owner, auctioned off, or destroyed.

Baker said he is concerned about the potential for weapons to end up in the wrong hands as more guns are sold throughout the state.

Baker estimates his agency approved around 25,000 pistol permits over the last year and a half. A number he called 'unprecedented.'

"We're not saying you can't get one. But we do need to toughen up the process of being able to get it. So we can hopefully keep them out of the wrong hands," Baker said.

Earlier this year, Gov. Roy Cooper vetoed a bill that would have repealed the pistol permit process in the state.

"During this time when we see a spike in gun violence, we call on our elected officials to strengthen our gun laws and not repeal them or do away with them or weaken them," said Becky Ceartas, with North Carolinians against Gun Violence.

"Gun violence can really be anywhere," Ceartas said. "Gun violence could occur in your own community. So we want to make sure to keep everyone safe from homicides from suicides from accidental shootings from mass shootings. There are things that can and should be done, evidence-based solutions to protect people from gun violence."