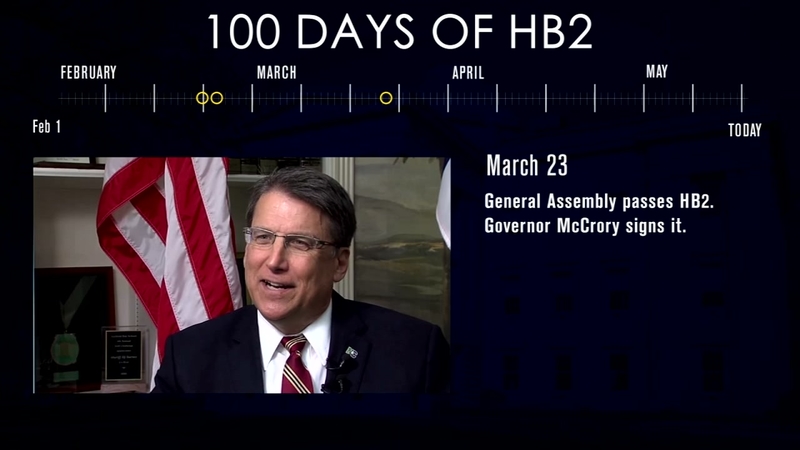 RALEIGH (WTVD) -- How did this whole HB2 thing get started? Let's take a look back.

February 22: The City Council votes 7-4 to add gay and transgender people to the list of classes protected against discrimination in Charlotte, effective April 1.

March 3: Republican legislative leaders (including Moore, Sen. Phil Berger, and Sen. Buck Newton, who's running for Attorney General) hold a news conference expressing support for a special session to overturn the Charlotte ordinance. McCrory declines to order the session because he worries that the General Assembly will go "beyond the scope of the bathroom issue," says a McCrory aide.

March 23: Despite Senate Democrats walking out in protest, the General Assembly passes HB2. McCrory signs it into law.

When and where was the first big protest?

When did the airhorn protests start?

BLAST OF AIR HORNS LATEST SALVO IN PROTESTS OVER HB2

March 29: Attorney General Roy Cooper calls the new law "a national embarrassment" and says his office will not defend the state against the ACLU suit.

April 8: Bruce Springsteen cancels his concert in Greensboro because of HB2.

April 11: The Greater Raleigh Convention and Visitors Bureau releases a report saying the county has lost more than $700,000 in response to the controversial House Bill 2 - and could lose millions more.

BOTH SIDES OF HB2 SQUARE OFF IN RALEIGH RALLIES

April 25: The General Assembly convenes for a short session and takes no action on HB2.

54 ARRESTS MADE IN HB2 PROTEST AS LAWMAKERS CONVENE

WHO WILL BLINK FIRST IN HOUSE BILL 2 BATTLE?

WAR OF WORDS FROM D.C. TO RALEIGH OVER HB2

In summary, there's been a lot of talk of a so-called "compromise deal" being worked out on Jones Street; the Governor trying to pull that together, meeting with Democrats behind closed doors Thursday.

But advocates out in front on this have been saying from the start that nothing short of a full repeal will do.