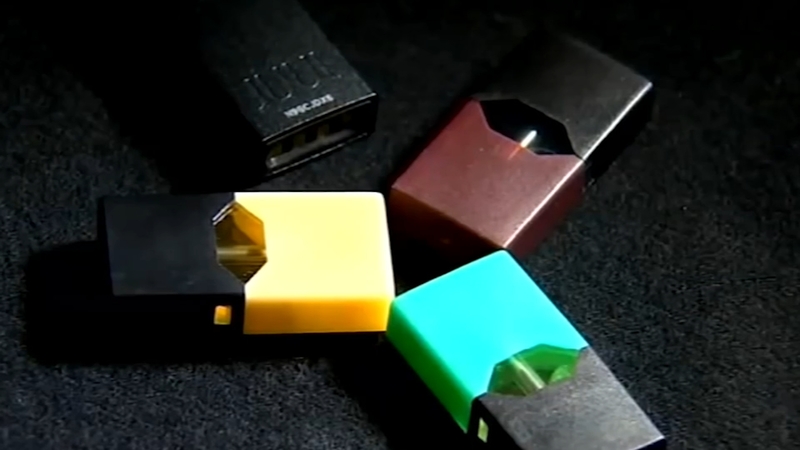 EMBED <>More Videos
There are new concerns about Juul products that are wildly popular with teenagers.

A study found high levels of a toxin in the liquid when it's heated.

The study was published in the American Journal of Preventative Medicine.

The joint effort by Duke and Yale University looked at eight flavors of Juul e-liquids.

Only Juul products were analyzed.

"We showed that Juul liquids have similar chemicals that are formed after mixing during manufacturing from the flavor chemicals-in this case, the vanilla flavor," said Dr. Sven Jordt, associate professor of anesthesiology at Duke University and one of the authors of the study. "The major message is that these liquids are unstable, that the chemicals they put in are not the chemicals that a few hours later are in these liquids -- they change over time. Depending on how users store them or use them, they may change again."

Most of the chemical testing was done at Yale's Tobacco Center for Regulatory Science.

"Especially if kids use Juul a lot -- say more than 2 Pods a day or something like that and there are certainly users that do that -- they may get exposed to quite high levels," Dr. Jordt said.

Juul said in part, "The researchers' hypothetical exposure analysis failed to take into account real world conditions, including realistic human exposure to vapor products like Juul. To reach 100 the milligrams per cubic meter threshold would require a person to consume upwards of 70 Juulpods in one day."

One Morrisville vape shop does not sell Juul products and "never will."

"Every day I get at least one person coming in to try and get off of cigarettes and here we like to educate everybody," said Tina, of the Vape Escape in Morrisville.

They also own a Cary location.

"Sadly because of this the Juul industry and the tobacco industry, the vaping industry may be done in a year and that scares us," she said.

Federal regulators have ramped up the timeline that e-cigarette makers face to submit applications for market approval.

"The researchers' hypothetical exposure analysis failed to take into account real world conditions, including realistic human exposure to vapor products like JUUL. Based on actual vanillin content in JUULpods, in order to reach the identified occupational environmental threshold of 10 mg/m3 vanillin exposure in the real world, a person would have to consume at least seven JUULpods, and likely much more, in a single day. To reach the 100 mg/m3 threshold the researchers attribute to JUUL would require a person consume upwards of 70 JUULpods in one day.

The researchers created a risk assessment model based on an occupational environmental standard for ambient air, which as applied to analyses of vapor products assumes a person would inhale only aerosolized vapor for eight hours per day, 5 days per week, for decades. In relying on this model, the researchers multiplied the vanillin content of an approximately 79ml puff of vapor by over 12,000 times to reach a cubic meter of vapor volume (cubic meter being the unit of measure used in the occupational standard). The result was to create a false equivalence and a measurement of exposure that would never be found in the real-world."
Report a correction or typo
Related topics:
health & fitnesshealthe cigarettesvapingvaporizerduke universityyale universitycigarettes
Copyright © 2021 WTVD-TV. All Rights Reserved.
HEALTH
Early detection of autism improves, but disparities remain
FDA health panel endorses Merck COVID-19 pill
CDC recommends vaccinated adults get booster amid omicron spread
Polyp in Biden's colon was benign, potentially pre-cancerous
TOP STORIES
Attempted robbery blamed for Black Friday shooting
Amber Alert issued for missing 13-year-old NC girl
Raleigh lab is 1 of dozens looking for COVID variants in US
Study suggests past COVID infection may not fend off omicron
Parents charged in MI school shooting; Teen's mom texts 'don't do it'
Cause of Pilot Mountain wildfire discovered
Show More
Alec Baldwin says he's not responsible for fatal 'Rust' shooting
UNC names buildings after two Tar Heel trailblazers
SPONSORED: Big Weather's Big Recipe: Jackie's Fruited Cake
Chapel Hill students, parents say racism at heart of teacher removal
Germany locks down unvaccinated people as COVID vaccine mandate looms
More TOP STORIES News