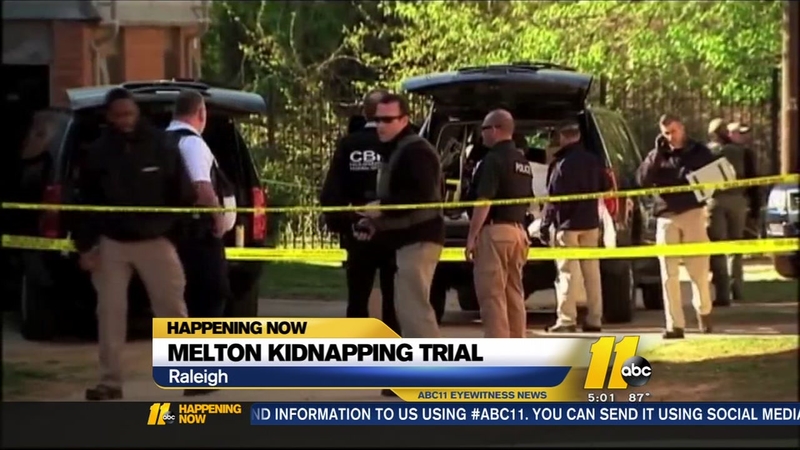 RALEIGH -- From a prison cell, a gang leader known as "Godfather" ordered his henchmen to kill the father of an assistant district attorney by stuffing a sock in his mouth and putting a plastic bag over his head, a federal prosecutor said Tuesday.

Prosecutors told jurors at the opening of Kelvin Melton's trial that they wiretapped a cellphone he used inside a North Carolina prison. They say the recording catches Melton ordering gangsters to kill the father of a North Carolina assistant DA in 2014. That state prosecutor had helped convict Melton in a 2012 case that sent him to life in prison.

Quoting the wiretap, federal prosecutor Leslie Katherine Cooley told jurors that the conversation captures Melton ordering someone to put a plastic bag over Frank Janssen's head, cinched tight, and wait until the lack of air "do what it do."

"You don't need an interpreter to understand the words of this man, 'Dizzy,' 'Old Man,'" Cooley said, pointing at Melton and using his nicknames.

Melton watched the jurors, his lips pulled tightly over his gold-encased front teeth.

Defense attorney Gerald Beaver urged jurors not to believe Melton's gang crew when they testify against him, including the four who kidnapped, pistol-whipped and tortured Janssen with a stun gun during his four-day ordeal in April 2014.

"Simply because somebody told someone a story, it doesn't mean it is true," Beaver told jurors. "Look at the witnesses' motivations to try and please the government. ... Every one of those witnesses have received a plea agreement."

Janssen's captors were finalizing details to kill Janssen and dispose of his body when a SWAT team stormed an Atlanta apartment and rescued him, authorities said.

Prosecutors said Melton used smuggled cellphones to direct gangsters to carry out crimes including the killing of a rival gang member in Warner Robins, Georgia; the home invasion, robbery and shooting of a gun collector in Covington, Georgia; and plans to kidnap people in Lake Charles, Louisiana, and High Point, North Carolina.

The kidnappings would have been of people related to the defense attorney who lost the North Carolina trial that led to Melton's current life sentence.

The federal trial is expected to last three weeks. If he is convicted, Melton could be sentenced to another life sentence, this time in federal prisons from which there is no early release opportunity.