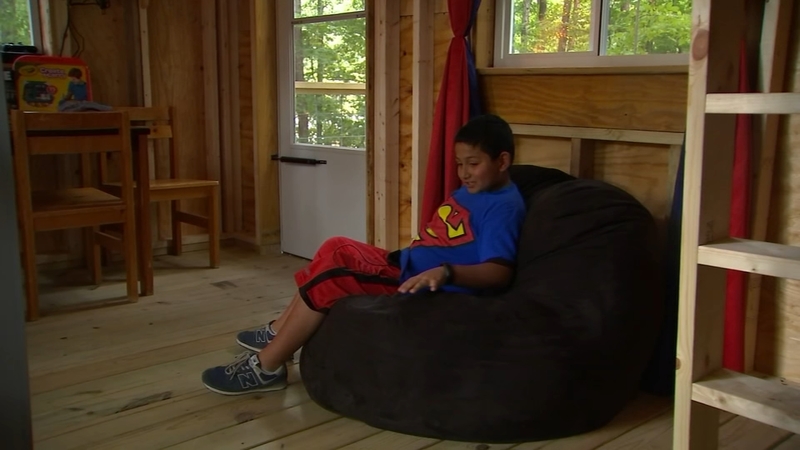 Volunteers constructed it the past three weeks for the 8-year-old Durham boy, who has a terminal illness.

The blue tree house has a Spider-Man theme inside and is complete with a bunk bed and desk.

It has a deck with a small table and chairs overlooking trees.

There are two IPads inside, an X-Box 360 and more.

"I got a TV for myself," Lorenzo said with excitement.

Lorenzo has ALD, a genetic condition that affects the brain. He lost both of his brothers to the illness.

His mom got emotional as she thanked everyone who helped with the project.

"How they took the time to come and support," his mom said in Spanish.

Steve Smith, of Pittsboro, lost a son and wanted to help when he saw Lorenzo's story on ABC11.
He took the lead on coordinating volunteers.

"The family's had other medical problems, medical issues," Mitch Morkunas, Durham Fire Department Battalion Chief said. "Something like this maybe helps lift them up a little bit."

Treehouse Masters even pitched in to help with consultation and equipment.

While Lorenzo doesn't have symptoms now, that is likely to change.

That's why volunteers placed a ramp from the driveway to take him right to the front door.

It's a peaceful place for Lorenzo to enjoy.

"We positioned it strategically to make sure that the deck was facing the woods, things like that," Smith said. "So once he does come in and he shuts the door, he pretty much is in his own world out here. It's really a powerful thing."

Lorenzo didn't waste any time, enjoying his new space in the trees.