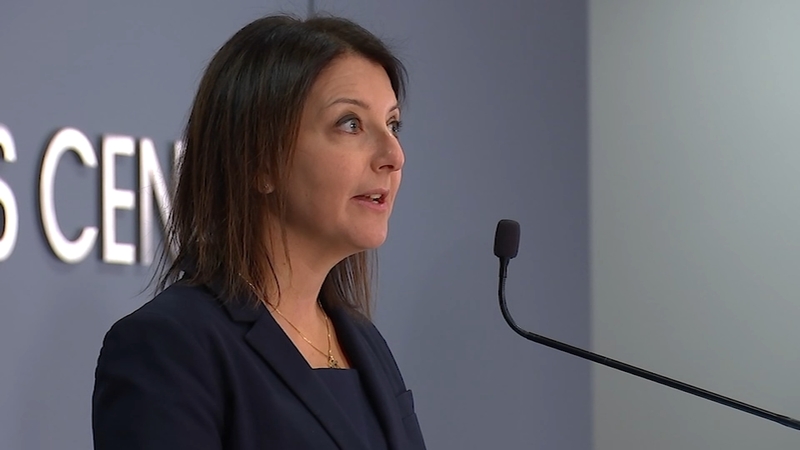 RALEIGH, N.C. (WTVD) -- North Carolina's Secretary of Health and Human Services Dr. Mandy K. Cohen will announce she is stepping down from her position after nearly five years on the job, ABC11 has learned.

"While it's hard to step away, it's the right time for me personally and the right time for our team," Cohen said during a news conference Tuesday afternoon. "It has been the honor of a lifetime to serve this state at such an important moment in history."

Cohen, first appointed by Gov. Roy Cooper in 2017, has been instrumental in the state government's response to the COVID-19 pandemic. She has often been the public face and spokeswoman for everything from vaccinations to mask requirements in schools.

"It's nice to be recognized, particularly as 'The Three W's Lady'," Dr. Cohen quipped in an earlier interview with ABC11, noting her near-daily emphasis on wearing a mask, waiting six feet apart and washing hands as key efforts to stop the spread of COVID-19. "But when I go home at the end of the day, I have two daughters and they could care less if I'm on TV or not."

Indeed, the Department of Health and Human Services is among the largest agencies in state government and, in particular, the governor's administration. As Secretary, Cohen is the de facto CEO of an organization with 17,000 employees and an annual budget of $20 billion. The department's programs affect millions of North Carolinians, NC Medicaid, Public Health, Mental Health/IDD/SUD, State Operated Hospitals and Facilities, Economic Services, Adult and Child Services, Early Childhood Education, Employment Services, and Health Services Regulation.

Dr. Mandy Cohen goes over COVID-19 metrics in North Carolina and addresses her decision to step down as NCDHHS Secretary.

In a news release, Cooper said he nominated Chief Deputy Secretary Kody Kinsley to replace her beginning Jan. 1. He will need to be confirmed by the North Carolina Senate.

Kinsley has served as the state operation's lead for the COVID-19 pandemic response and has served in the department for nearly four years. He will be the first openly gay cabinet secretary in North Carolina history.

In Tuesday's news conference, Cohen affirmed her confidence in Kinsley's ability to lead the department, despite his lack of a medical degree.

"So much of it is about the execution and the operations, and this is where Kody Kinsley shines, and I have leaned on him so much," Cohen said.

Prior to joining the department, Kinsley worked for the federal government under both the Trump and Obama administrations.

As for her own future, Cohen said she will take some time to recharge with her family before looking for the next opportunity. While she said she has no plans to run for public office, she did not say whether her next role would keep her in the Tar Heel state.

"Mandy Cohen has shown extraordinary leadership during her tenure and she has worked every day during this pandemic to help keep North Carolinians healthy and safe," said Gov. Cooper in a written statement. "We are stronger because of her efforts and I am enormously grateful for her service. She has built a remarkable team of talented people including Kody Kinsley, and I know he will continue the strong legacy of competence, effectiveness and efficiency as he takes over as Secretary."

Before coming to North Carolina, Dr. Cohen was appointed by President Barack Obama to be the Chief Operating Officer and Chief of Staff at the Centers for Medicare and Medicaid Services (CMS) and was a key figure in managing several provisions of the Affordable Care Act.

According to her official state biography, "she brings a deep understanding of health care to the state and has been responsible for implementing policies for Medicare, Medicaid, the Children's Health Insurance Program and the Federal Health Insurance Marketplace."

Dr. Cohen's leadership in North Carolina has also gained national recognition, as there was wide speculation that Dr. Cohen was a finalist for a position in the Biden administration. Also in 2020, Dr. Cohen won the Leadership in Public Health Practice Award from Harvard University's T.H. Chan School of Public Health for her role in the state's pandemic response.

Area hospitals also joined in congratulating Cohen on her tenure.

"North Carolina has been extremely fortunate to have Dr. Mandy Cohen's leadership over the past five years, and especially throughout the pandemic," said Dr. Wesley Burks, CEO of UNC Health and Dean of UNC School of Medicine, in a written statement. "She has demonstrated strong and steady leadership in helping guide North Carolina through this crisis. Her passion for helping others was an important factor in reducing the impact COVID has had on our state. I have appreciated her wise advice many times during the past two years. I wish her all the best and thank her for her unwavering dedication to improving the health and wellbeing of all North Carolinians. We look forward to continuing to work with Kody Kinsley in his new role as Secretary."

"Secretary Cohen's leadership throughout her tenure at the DHHS has helped our state navigate turbulent times. She made herself available to legislators to answer questions and kept us informed about issues facing the department. She was also instrumental in successfully implementing Medicaid transformation. I want to thank her for her service to the state and wish her well in her future endeavors."
Report a correction or typo
Related topics:
health & fitnessraleighnc stateroy cooperretirementdhhscovid 19
Copyright © 2022 WTVD-TV. All Rights Reserved.
TOP STORIES
Smith, Raanta, Hurricanes top Rangers for 2-0 series lead
1 person in hospital after shooting overnight in Raleigh
Canes fans pile into PNC for Game 2 despite COVID resurgence
Parents share mixed reactions over plans for boosters for children
Fayetteville PD on track to full staffing; what about Durham, Raleigh?
Mail delays blamed on dog, owner claims case of mistaken identity
Body found on the bank of the Tar River in Edgecombe County
Show More
Wake Schools bus driver charged with driving bus while impaired
'Thrilled to death': Princeton man wins Cash 5 jackpot
Raleigh breaks heat record set in 1938
Raleigh resident from Buffalo, NY weary one week after massacre
Judge: COVID-19 asylum restrictions must continue on US-Mexico border
More TOP STORIES News