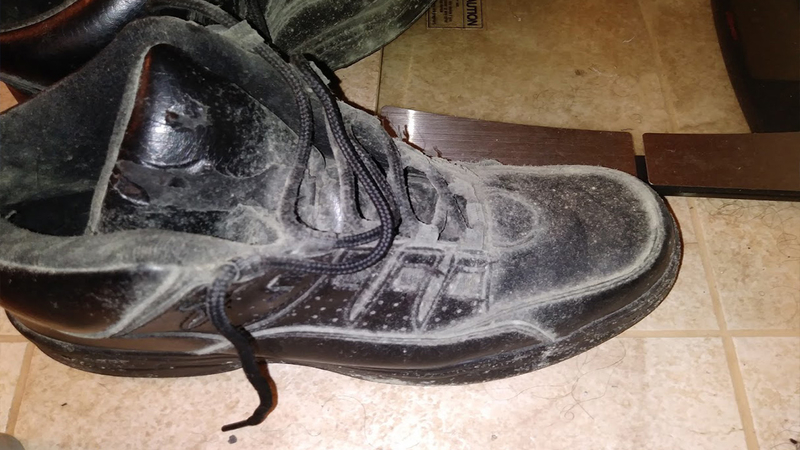 The apartment complex in question is Water Garden Park off Glenwood Avenue in Raleigh.

It's was built less than four years ago and offers affordable housing for seniors.

Betty Merkerson has lived in the apartment complex for more than three years.

"I've gotten mold every year, and this year I got it twice," Betty said explaining that she's documented how the moisture issue has caused problems for her apartment, furniture, and clothes. "They had contractors come in and clean my whole apartment, even my closet; shoes had mold on it, clothes did, furniture."

Water Garden Park did put a humidifier in her apartment to try and get rid of the moisture, but Betty said it wouldn't be long until she'd have the problem again.

"It's on all of my walls, behind my sofa, behind my bed, in my closet," Peterson said. "They have sent people in to clean it; it comes back within two weeks or less."

Peterson said the problem has taken a toll on her.

"I'm having headaches, shortness of breath, and I'm not like this outside, it's only when I come in here," Peterson explained.

PHOTOS: Residents show that mold and mildew have started to form on their personal belongings

Judy Dickinson, who also lives in the complex, said she just wants answers.

"I sneeze all the time when I'm in the apartment, not anywhere else," Dickinson said.

Dickinson admitted that management at Water Garden Park does check out her concerns each time but said it's the lack of answers that's frustrating.

"We keep waiting for them to report to us what they find out and we never hear anything," she said.

Maria Zecca, another resident impacted by the moisture issues, said she found fungi growing on her leather jacket and vents.

"It's a reoccurring issue every year as soon as we put the air conditioner on," Zecca explained. "They clean the coats and they clean the vents ... I don't know about the time frame, but then it's back. I want them to get to the root of the problem and correct it."

And that was the hope as I sat down with Natalie Britt, the owner representative of Wake Garden Park, to get answers.

Britt admitted the testing in some of the apartments has shown mold, adding that they are not taking this issue lightly.

Of the 88 units in Water Garden Park, she said in at least 22 units, a moisture or mold problem has been reported.

"We have tried to map out where which units have been affected, and it's not happening in one section of the building, so it has been more puzzling as to why it's happening."

Britt said the complex is documenting and tracking each complaint that residents file on the moisture issue.

"The residents are very important to us," Britt said. "They are why we do what we do every day. We know that many are feeling very frustrated."

Britt explained that Water Garden Park was built to what's known as LEED standards, meaning it's a green building that is environmental and energy efficient.

"One of the requirements of that green building program is that outside air has to be directly entering into the apartment units for extra air ventilation," she explained.

Britt believes the summer months are the cause of growth because during that time the hot, humid outside air mixes with the AC, causing the moisture issues.

Water Garden Park has made changes to the outside air venting system, and the residents are still having problems.

"I think it is a complicated problem with lots of different environmental and living habits overall contributing to the problem," Britt said.

It's an action many residents said they want to happen sooner rather than later.

"I don't want to move, but if you can't solve the problem, I can't stay here and get sicker," Peterson said.

--------------------------------------------------------
ABC11 has decided to slowly reduce the number of stories on the website that have a comments section. We believe very strongly that our audience should have an opportunity to discuss and debate events in our world, however, we have not been able to moderate the comments as well as we would like. Instead of hosting a platform that could allow a few loud and ugly voices to dominate a conversation, we want to encourage everyone to join us on our social media platforms and speak out there. Facebook: facebook.com/ABC11 Twitter: twitter.com/ABC11_WTVD
Report a correction or typo
Related topics:
raleighhealthtroubleshootermoldapartmentmildewraleigh news
Copyright © 2022 WTVD-TV. All Rights Reserved.
TROUBLESHOOTER
Apex dog owner warns others after pharmacy's medication mishap
New Wi-Fi device this holiday? Protect yourself from hackers
Wake County tenants, landlords waiting months for assistance
Are extended warranties worth it on back-to-school laptops?
TOP STORIES
Supersonic jet startup Boom to open factory in NC
Driver ticketed for crashing into Chapel Hill playground
Supreme Court Justice Stephen Breyer to retire
Snow possible this weekend but major impacts not expected
Fayetteville mother, daughter missing since 2016 found safe
LATEST: Wake County reduces COVID-19 testing hours
1 dead, 38 missing after boat capsizes near Florida; 1 survivor found
Show More
California redwood forest returned to Native American tribes
Biden administration officially withdraws vaccine rule
Fed plans to raise rates as soon as March to cool inflation
North Carolina Zoo closes aviary after report of bird flu
RDU scrambles to resupply deicer after runway mishap during snow storm
More TOP STORIES News