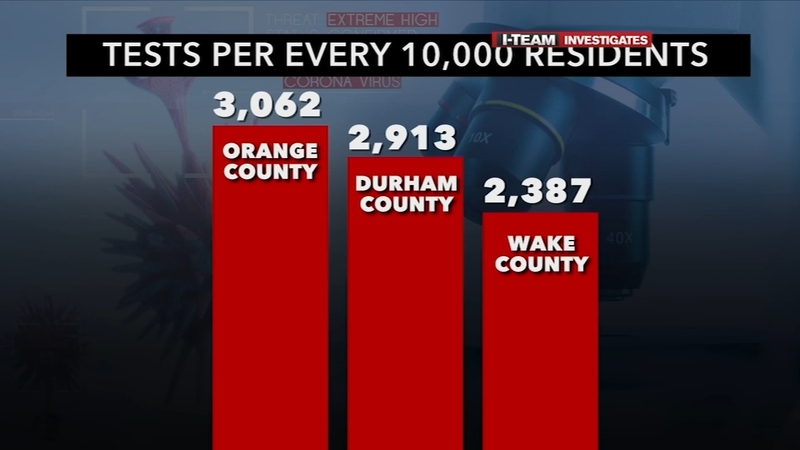 RALEIGH, N.C. (WTVD) -- North Carolina has ramped up testing across the state for months but new data reveals not every county is reporting the same volume of testing.

The ABC11 I-Team obtained county-by-county testing data from the North Carolina Department of Health and Human Services after months of requesting the information.

Statewide, North Carolina conducted an average of 2,207 tests per every 10,000 residents as of September 17.

Granville, Greene and Hyde County topped the state with most tests per capita. Each county reported conducting more than 3,600 tests per every 10,000 residents.

"If a particular county has a large volume of tests, it may be driven by the fact that it has had a series of outbreaks in communities or facilities and in response to those outbreaks, testing swelled around those people who were exposed," he explained.

Whereas, if a county was on top of prevention and there wasn't many opportunities for exposure, a lower volume of testing would be expected.

"It's a bit of a chicken and egg situation," he said.

Kinsley also noted that areas with universities or hospitals might have slightly higher testing volumes because of their resources.

This impact is seen in Durham and Orange County, both home to major universities and also both ranking high in the state. Both counties each conducted 700 more tests per capita than the state average.

RELATED: Black neighborhoods have less access to Raleigh COVID-19 testing centers, but the gap is shrinking

About half the state reported conducting fewer tests than the state average. Camden, Currituck and Onslow counties each reportedly conducted fewer than 900 tests per 10,000 residents.

Cumberland County also ranked in the bottom of the state with 1,173 tests per every 10,000 residents, according to the NCDHHS data.

"We certainly know that we need to improve the amount of testing we do in Cumberland County and we are trying to work with healthcare providers here so they can increase their capacity for testing and of course the resources for testing varies by county," said Jennifer Green, Cumberland County's health director.

The county offers testing twice a week and has been partnering with faith-based organizations to increase turnout.

"One of the things that we are seeing in the data is even though we have more sites, fewer people are showing up to those sites to get tested," Green said.

Green explained this is a shared challenge across the state, as is funding.

"We all have funding from the state health department, but that funding I will say is not sufficient and that's not just true for Cumberland County that's true across the state," Green said. "Health departments need more dollars in public health to roll out this initiative for testing. If we're going to be expected to open all these test sites, then we are going to need more funding to do that," Green said.

Cumberland County is working with state health officials to receive another testing vendor and to develop a countywide testing plan.

Kinsley said the state is continuing to work to target historically marginalized populations and areas with a high rate of uninsured people with additional testing vendors.

RELATED: How North Carolina ended up with 283,500 vials of unusable COVID-19 testing material from the federal government

"Part of demand is not just about bringing about supply or even marketing or communicating it but really about the right folks that can be liaisons into those communities," Kinsley explained.

Kinsley also said the reason county-by-county testing data was not shared previously was due to many labs not reporting results electronically.

"There isn't a particular reason why it's not there, we just haven't had the technology support to do that, but it's on the work plan," he said.

NCDHHS plans to host 280 community testing events across the state over the next two months.