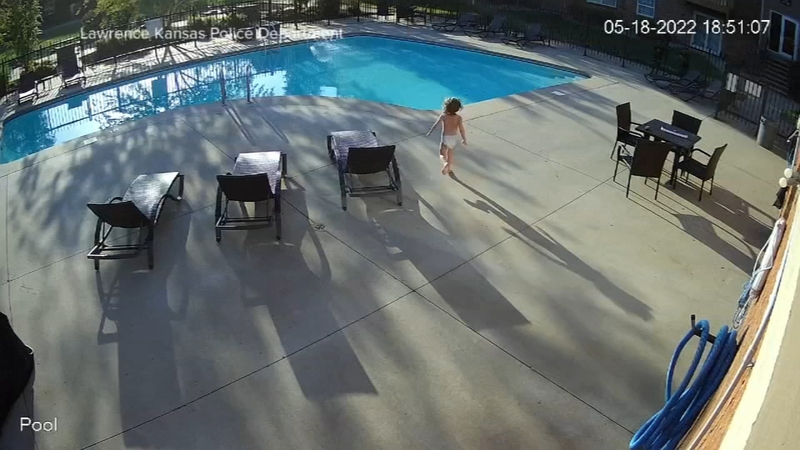 Father, 12-year-old son save 4-year-old boy who jumped into pool

LAWRENCE, Kansas -- A family is grateful after a heart-stopping near-drowning in a Kansas pool was averted.

Recently released surveillance video shows 4-year-old Xavier Rigney, who is autistic and also non-verbal, jumping into a pool in a Lawrence apartment complex on May 18.

Police said Xavier somehow got through a locked fence to make his way into the pool.

"My friends were yelling at me to go get help and I just went like 'oh no' and ran," Maddox said.

Authorities say Maddox ran back to his apartment to find his dad, Tom Westerhouse.

Tom jumped a fence to get into the pool area and pulled Xavier out of the water.

"When he started to cough up water and everything, I knew that was a good sign," Tom said.

First responders said without Tom, it might have been too late.

The risk of children with autism drowning is up to 10 times greater than other children, according to the National Drowning Prevention Alliance.

The NDPA says drowning is the single leading cause of death for all children between ages 1 and 4.

Xavier's mother, Alexis, met the father and son heroes for the first time since the incident during a press conference last Thursday.

Alexis says she was caring for her 4-month-old who was crying when she noticed Xavier was missing from their apartment.

"He's my best friend, so I don't know what I would do without him," Alexis said as tears fell.

Alexis says she noticed paramedics at the complex and followed them. That's when she saw Xavier.

"I never thought he'd be able to get into the pool," Alexis said.

She says she didn't know what would have happened to her son if Maddox wasn't out there at that time.

Officials say more than half of child drownings occur within 25 yards of a parent.