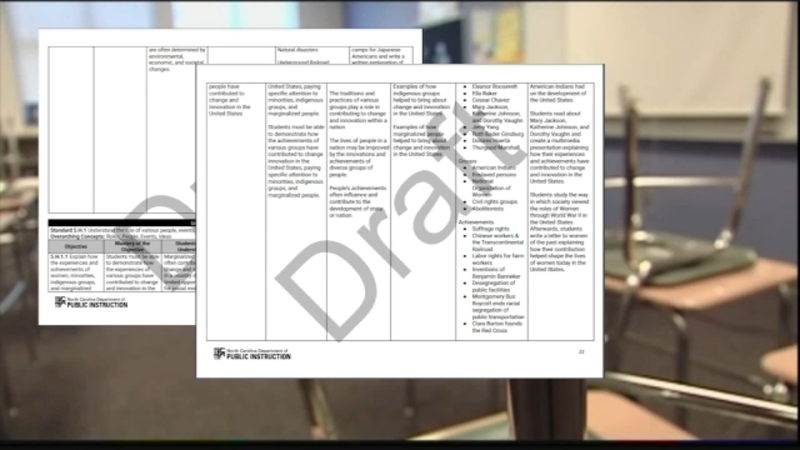 North Carolina's State Board of Education approved a set of documents teachers will use for reference when teaching the new controversial social studies standards this fall.

During the board's virtual meeting Thursday, the board voted 7-3 to approve of the supporting documents that include a revised glossary of terms to be used in social studies classrooms, helping teachers navigate conversations about racism and discrimination.

Absent from the glossary were terms such as "systemic racism," "systemic discrimination," or "gender identity" as they were struck in a compromise among board members who voted 7-5 to pass the standards in February.

While supporters of the new standards said they were more "inclusive," those who opposed the change in standards called them "divisive" and "anti-American."

Dr. Olivia Oxendine, who voted against the standards in February, pushed back on the supporting documents during Thursday's meeting, criticizing the lack of criteria for developing examples listed in what are called "unpacking documents" that 5th grade teachers will use to teach.

Oxendine specifically referred to a section in which the teacher's objective would be to explain how the experiences and achievements of women, minorities, indigenous groups, and marginalized people have contributed to change and innovation in the United States. The document cites examples such as Susan B. Anthony, Sojourner Truth, Eleanor Roosevelt, and Ruth Bader Ginsburg, but does not list Sandra Day O'Connor.

"I know we cannot think of every person in history, every event in history, every major theme in history, but I cannot for the life of me understand how -- in this particular standard within the unpacking documents -- how we missed Sandra Day O'Connor, the first female to serve on the US Supreme Court, appointed by Pres. Ronald Reagan in 1981."

Catherine Truitt, State Superintendent, explained to Oxendine that the documents are not meant to include an exhaustive list of examples for teachers to stick to, but rather enhance their understanding of how to engage with the standards and objectives.

Oxendine, doubling down on her concern over a lack of criteria for developing the supporting documents, cited another teacher objective to explain how the government has protected individual rights of citizens, saying the state-level documents should include examples of the rights of the disabled and veterans.

"I think you're illustrating the richness of possibilities that lie within these documents," said board member Jill Camnitz. "I hear your frustration, but I think our teachers will uncover those stories to tell and talk with their students about."

As for conversations with students in the classroom, board member J Wendell Hall asked to clarify just how far teachers would be allowed to go.

"When a question is raised from one of the students dealing with discrimination, gender, racism -- is that teacher permitted to explore deeper during the instructional period?" Hall asked. "I want them to feel free, not to be enclosed or fearful of touching on some of these issues. I just need to know, do they have that option?"

Truitt, responding in the affirmative, clarified that teachers are not bound by law or policy to even use the documents the state board has now adopted.

Neither Lt. Gov. Mark Robinson, an outspoken critic of the new standards, nor State Treasurer Dale Folwell were present at Thursday's meeting.

The board voted to approve the documents in a 7-3 vote with Oxendine, Amy White, and Todd Chasteen voting against approval.