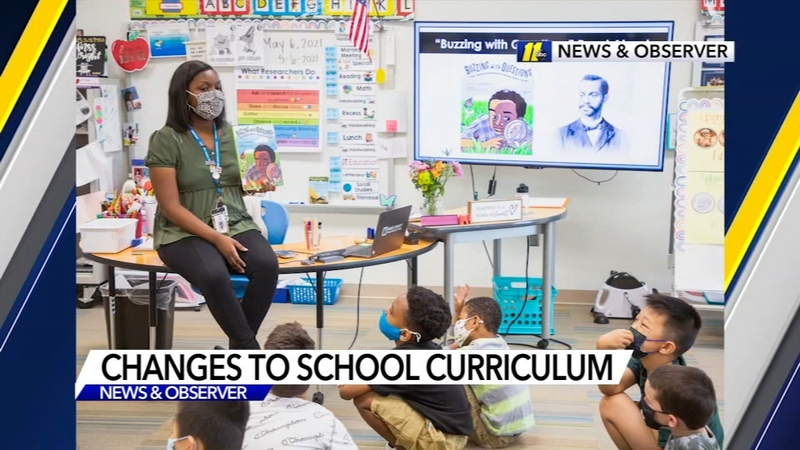 NC schools say they need to talk about race, but disagree on how

WAKE COUNTY, N.C. (WTVD) -- During a recent class at Hortons Creek Elementary School, 2nd-grade teacher Bria Wright's students advocated for the protection of butterflies. Wright hopes her lesson on protecting the butterflies shows the young students how they can influence things they become interested in, including social justice.

Schools in North Carolina and across the nation are addressing the issue of race as part of what they say is an effort to better meet the needs of their students.

Such lessons will increase under new state social studies standards that say teachers should discuss racism, discrimination and the perspectives of marginalized groups.

"If we don't confront the issues that come along with how we address issues of race, then you can never really kind of overcome the negative consequences," said Rodney Trice, the Wake County school system's assistant superintendent of equity affairs.

However, the discussions about race and culture are producing a backlash from some conservatives who says schools have gone too far.

It led Republican House lawmakers to pass a bill on Wednesday that puts new rules on how schools teach about race and history, including not promoting teaching that would make students feel guilt or discomfort due to their race or sex.

The legislation, which is on its way to the state Senate, also said schools can't promote that the United States "was created by members of a particular race or sex for the purpose of oppressing members of another race or sex."

"Our children, regardless of their background, should know that it is their shared and diverse experiences that make America great, and learning about those experiences should bring them together - not drive them apart," GOP Lt. Gov. Mark Robinson said in a news release. "This legislation ensures that our students will be taught that we all have value, regardless of who we are - or who our ancestors were."

Robinson recently created a task force to collect complaints from parents, students and teachers in public schools across the state about what he called "indoctrination" in the classroom.

Supporters of the bill say they're trying to limit the use of "Critical Race Theory, a "scholarly framework that describes how race, class, gender, and sexuality organize American life," according to the UNC-Chapel Hill history department. This view says systemic racism has been and continues to be a part of the nation's history.

Republican lawmakers have introduced bills at state and national level against the use of Critical Race Theory.

Opponents of such bills, meanwhile, say they would limit classroom discussion of any forms of racism.

"Just because we pass a bill that makes it harder for teachers to talk about systematic racism does not mean that our children will still not experience that same systematic racism," Rep. Kandie Smith, a Pitt County Democrat, said during Wednesday's debate on the bill. "Slavery and its legacy of oppression are not only part of North Carolina's history, they are the reality."

Wake County also drew attention for offering a course on Critical Race Theory on its staff training website. The session was taught by an organization co-founded by state Rep. Graig Meyer, according to the North State Journal.

Lisa Luten, a Wake school spokeswoman, said the class had been mistakenly added without going through proper vetting. Luten said the class, which was going to be offered again this year, was canceled because it doesn't align with the district's equity efforts.
Despite coverage, Trice said Wake County does not use Critical Race Theory in its curriculum, instead using "Culturally Responsive Teaching."