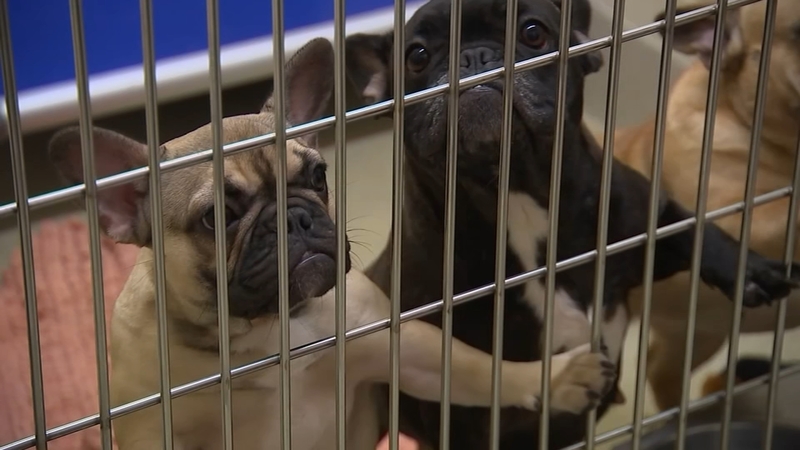 ORANGE COUNTY, N.C. (WTVD) -- An Orange County mother and son have been charged with felony animal cruelty after 57 mastiffs, French bulldogs and English bulldogs were seized from their property.

Taylor Doar, 35, and his mother Cynthia Riggins, 65, were arrested Friday the dogs and puppies were found in deplorable conditions at a property off Alexander Drive..

"We know it's an underlying issue or cause that gives rise to the assembly of 57 dogs," said Orange County Animal Services director Bob Marotto. "I mean that is a lot of dogs to manage in a single residence! It's almost incomprehensible that one would do that in a single residence."

UPDATE: We are getting our first look at several of the 57 dogs and puppies that were seized from a Chapel Hill home on Friday. They’ve been under constant watch/care since arriving to the animal shelter. They are not up for adoption at the moment. #ABC11 pic.twitter.com/QI8QsjNxLR

The animal shelter declined to call the operation a puppy mill; stopping just shy of labeling it as such.

Marotto said the dogs present a unique challenge in housing each of them. He believes the shelter may have to start turning away people who want to surrender their pet.

He also stressed the dogs are not available for adoption as the shelter is merely housing them for the time being.

That could change if the court decides to permanently separate Doar and Riggins from their animals.

"We do not want to see animals euthanized or destroyed as a result of bringing these animals here," Marotto said. "We have not seen anything so far in these population of animals that suggests that they themselves cannot be re-homed in due time."