ABC11 Together highlights the strength of the human spirit, good deeds, community needs, and how our viewers can help.
WTVD
By Anthony Wilson 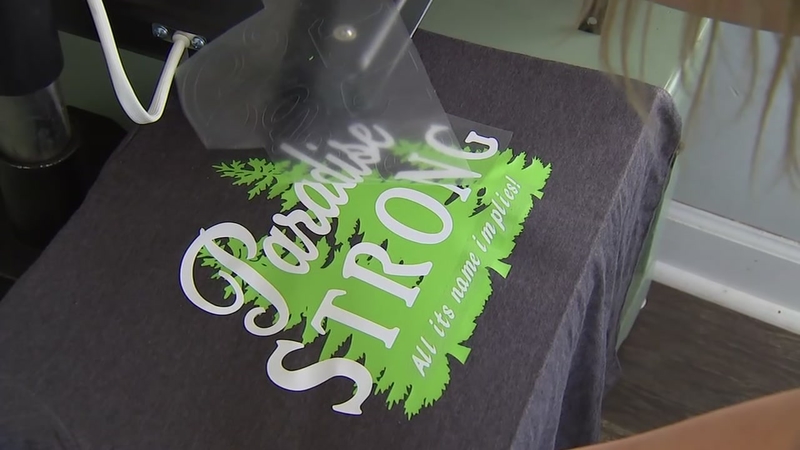 "It used to be a gold miner's town, so we have like, the Gold Nugget Day parade," she said with pride. "We had Johnny Appleseed days."

She said the mountain town, with a population of about 27,000 and renowned for its trees, used to look and feel a lot like western North Carolina. Now, while teaching her sociology classes at Wake Tech, she shares her experiences there whenever questions about current events arise.

"When students are like, 'oh, did you see this about that?' I'm like 'yeah, that's my friend's brother in law.' It has a different impact on you when you know them by name."

Unable to sleep after seeing news about the devastation, she read a social media message from a hometown friend that said "so come on friends and family, even though you were affected by the fire, let's see some posts and pictures of what everything looks like."

The message inspired her to design and produce "Paradise Strong" logo shirts that could boost spirits there.

"I like to do crafts and I was doing shirts for fun, so I decided instead of doing it for fun I'd do it for a purpose," she said while preparing a shirt for production. She tells us profits from sales of the shirts will help survivors of the Paradise fire get back on their feet.

Shurtleff said people who purchase shirts that can be sent to Paradise earmarked for students there can make a real difference in their lives.

"With that we'll see gift cards. Whatever the profit was for the shirt, we'll send out a gift card with it so they can buy what they need," she said.

Creating the shirts, by hand, takes a while. So far, she's produced about two dozen. That may not seem like a lot when you consider the scope of the devastation in Paradise. But she said it's about more than volume, and she hopes the shirts will ultimately raise awareness of the situation faced by the people of Paradise while inspiring other people to help them.

One of her friends donated dozens of shirts that will eventually wear the "Paradise Strong" logo, and others are helping her with the production that she's doing by herself, shirt by shirt.

Another friend has created a space online, at Huckleberrylife.com/Paradise, to take orders for shirts.

Shurtleff said the teamwork's a lesson for her students and others who wonder what they can do for people affected by situations like the one in Paradise.