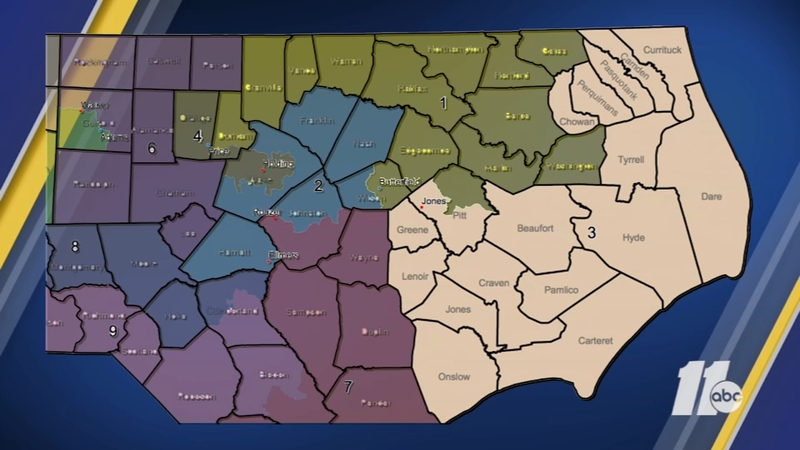 FAYETTEVILLE, N.C. (WTVD) -- Today could finally be the end of the 2018 Midterm Elections. Seriously.

Yes, the Democrats swept to power in the House of Representatives. They flipped some 40 seats and drastically altered the dynamic on Capitol Hill and gave Democrats the power to subpoena and investigate the President.

Yes, the Republicans held strong in the Senate. They strengthened their slim majority and further empowered President Trump to nominate conservative judges and hold the line on key Democratic legislative priorities.

None of that changes with what happens on September 10 in North Carolina's 9th Congressional District, but the race between Democrat Dan McCready and Republican Dan Bishop has the symbolic power to set the tone for what happens in 2020.

The NC09 Special Election is the culmination of a historic political saga complete with political wrangling and political injustice.

As if North Carolina politics weren't already in the national spotlight.

Round 1: Dan McCready versus Mark Harris too close to call

North Carolina's 9th Congressional District stretches from the Charlotte area south to the state line, then west to the Sandhills and part of Fayetteville.

Like many races across the country, NC09 was high on the list of hotly contested races in the Midterms: Democrat Dan McCready, a Duke graduate and former Marine, versus Mark Harris, a Charlotte pastor who challenged incumbent Rep. Robert Pittenger and ended up defeating him in the GOP primary.

On Election Night, the race went down to the wire and was too close to call. Days later, the count was finalized but not certified - Harris led McCready by about 900 votes.

As county boards of elections began to canvass, however, allegations emerged in Bladen County that a woman was knocking on doors saying she was there to collect absentee ballots.

"A white woman came to my house saying she was helping people vote and that's exactly what she acted like she did," voter Emma Lee Shipman told ABC11 on December 3. "When they got through, she took the ballot and went on."

"She said I brought your ballot back. Here is a stamp. I want you to mail it,"said Shipman.

Shipman told ABC11 she took the ballot down to the Bladen County Board of Election's office. She was informed she was not alone and that woman had tricked many others.

Questions surrounding Bladen County provoked further concern among state officials in late November, and the State Board of Elections thus refused to certify Harris as the winner over Democrat Dan McCready. The board cited allegations of "irregularities and concerted fraudulent activities" involving mail-in ballots, and subpoenaed both the Harris campaign and its campaign consulting group, Red Dome, for documents.

Investigators would soon identify that strategist as Leslie McCrae Dowless Jr. According to documents released by the elections board, Dowless seemed to have collected the most absentee ballot request forms in Bladen County this fall. A copy of the Bladen election board's logbook shows Dowless turned in well over 500 applications.

McCready, expressing outrage over what he called a shameful attack on democracy, withdrew his concession and demanded that Harris explain what he knows about the absentee ballot allegations.

"I trust the process that's underway," Harris said in a video he posted on his Twitter account December 7. "I trust this investigation will be full and complete, examining any irregularities that could have benefited either party."

State investigators presented its evidence and conclusions in a high-stakes evidentiary hearing that began on February 18.

The hearing that had been scheduled for one day ended up lasting four; investigators reported the company Harris hired to help with his political campaign ultimately paid McCrae Dowless to illegally collect absentee ballots in a "coordinated" and "unlawful" scheme in Bladen and Robeson counties.

The turning point in the case was perhaps the explosive testimony from Harris' son, John, who testified he warned his father about potential problems with absentee ballots in Bladen County.

The next day, Harris would tell the Board of Elections that he would support a new election in the 9th District.

"Neither I nor any of the leadership of my campaign were aware of, or condone, the improper activities that have been testified to in this hearing," Harris said from the stand. "Through the testimony that I've listened to over the last three days, I believe a new election should be called. It's become clear to me that the public's confidence in the Ninth District's seat general election has been undermined to an extent that a new election is warranted."

Round 2: Dan McCready vs Dan Bishop

A call for a new election didn't just restart the general election -- it restarted the entire process, including primaries.

McCready excitedly re-declared his candidacy, but it was unclear at first if Mark Harris would vie for the Republican nomination again or if Republican voters would support that candidacy given the circumstances.

"While few things in my life have brought me more joy than getting to meet and know the people of this incredible part of North Carolina, and while I have been overwhelmed by the honor of their support for me as the Congressman-elect of NC-9, I owe it to Beth, my children and my six grandchildren to make the wisest decision for my health," Harris said in a statement on February 26. "I also owe it to the citizens of the Ninth District to have someone at full strength during the new campaign. It is my hope that in the upcoming primary, a solid conservative leader will emerge to articulate the critical issues that face our nation."

State Senator Dan Bishop (R-Mecklenburg) would soon emerge as the GOP candidate after defeating two opponents in the primary, finalizing the matchup against McCready. Bishop is regarded as a staunch conservative, and was one of the architects of House Bill 2, also known as the "Bathroom Bill."

There could be a Round 3

Regardless of who emerges as the winner in the Special Election, the incoming Congressman will just as soon need to file for re-election. It's also possible that the same two candidates could square off again in November 2020.

Should McCready win, it would be the first time since the 1960s that the 9th District would turn blue. In 2016, Trump won the district by 11 percentage points.

Should Bishop defeat Democrat Dan McCready, it could give Trump room to assert that he pulled Bishop over the top. If McCready prevails or Bishop wins by a whisker, it will suggest GOP erosion and raise questions about Trump's and his party's viability for 2020.