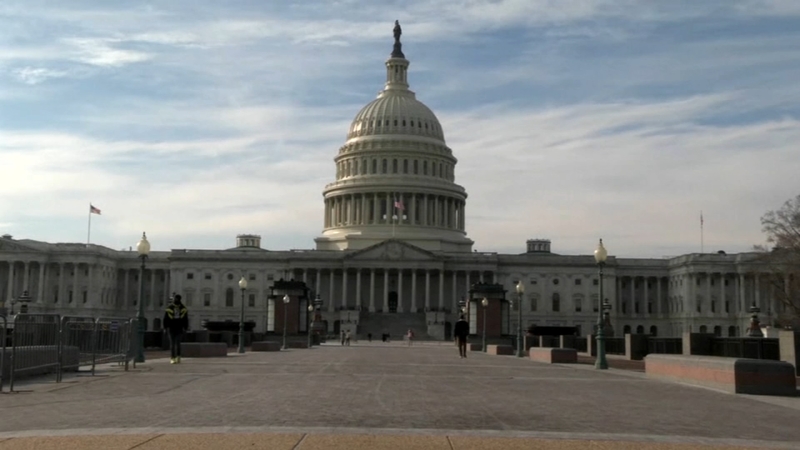 RALEIGH (WTVD) -- President Donald Trump's about-face to his about-face on the COVID-19 relief package capped a tenuous and strenuous stretch for North Carolina's overwhelmingly Republican congressional delegation, which had returned to Capitol Hill Sunday with billions of dollars and millions of American livelihoods at stake.

"The main highlights are getting more loans to businesses because small businesses, the hallmark of our economy, they have just been struggling," said Rep. Greg Murphy (R-North Carolina). "This gives them a lifeline, a lifeline into the spring which hopefully when people are vaccinated well get back to a better economy."

Second stimulus checks: See how much money you might receive under the new stimulus bill

Trump announced Sunday night that he had signed the $900 billion COVID-19 stimulus package and the accompanying $1.4 trillion government spending bill, but he did so while also saying Congress needed to make changes to the bill.

Trump, whose own advisors were the architects of the bipartisan agreement, shocked everybody earlier in the week by threatening not to sign the bill. He called it "a disgrace" and called for an elimination of wasteful spending as well as an increase in stimulus checks to individual Americans--which his own representatives worked to decrease in the first place.

"Treasury Secretary (Steve) Mnuchin was up there representing the White House," ABC News Chief White House Correspondent Jonathan Karl said of the Capitol Hill negotiations. "He's the one who recommended the $600 payment. The politics are entirely scrambled here."

Among the 10 North Carolina Republicans in the House of Representatives, Ted Budd and Dan Bishop were the only two to vote against the package.

Among the 10 North Carolina Republicans in the House of Representatives, Ted Budd and Dan Bishop were the only two to vote against the package.

"I think there's a happy medium," Rep. Murphy, whose district includes Greenville and Eastern North Carolina, said. "I really wish we could hone this down to where people affected are the only ones getting money. Unfortunately, a lot of the stimulus checks (from the CARES Act) went to go buy televisions or luxury items when they should've been used for rent. It's a balancing act."

U.S. Census data from July showed 62 percent of individuals who received checks used or planned on using most of the $1,200 on expenses.

The numbers from the U.S. Census' Household Pulse survey show a majority of people used the money to buy food, household supplies and pay utilities. Across the state, less than 10 percent of residents planned on spending the cash on electronics, games, sports equipment or donating to charity.

In the face of economic hardship and spreading disease, lawmakers urged Trump on Sunday to sign the legislation immediately, then have Congress follow up with more. That is what Congress will have on its docket when it returns Monday.

"Ultimately, while imperfect, I supported both portions of the package ... because Secretary Mnuchin asked us to support it," Rep. David Rouzer, a Republican Congressman who represents parts of Johnston County, wrote on his website. "Whether he went rogue on the President, I will likely never know. But I do know this: We all took him at his word with the understanding that he was speaking for the President."

"This is not any time to have a disruption," he said. "It's the holidays, the end of the month when people have bills to pay. Cities and states have people not working during the holidays. It's harder to start and stop these things."

"The date was really unfortunate," Michele Evermore, a senior policy analyst at the National Employment Law Project, a workers' advocacy group, told the AP. "Now there's some question as to when this gets paid out." It is possible that the Labor Department will interpret the law to allow payments for the week ending Jan. 2, Evermore said. But if the bill had been signed Saturday, payments clearly could have restarted this week.

And it will likely take two to three weeks for states to update their computer systems to resume the aid programs and pay out the extra $300, Evermore said, a process that could have started earlier, after Congress first approved the bill about a week ago.

Still, Klein says there's enough optimism on Capitol Hill from the fact that Congress came to an agreement at all - and there could be the momentum needed for more success under the incoming Biden administration.

"This bill started in the middle and that's rare these days. This is a bipartisan group who said this is the framework to get things going and then leadership got involved. That's the same middle that Biden will tend to and hope he can carry through. It won't be extremes in either party and people who want to solve problems the Biden way and that's centrists point of view."