WTVD
By Jonah Kaplan
RALEIGH (WTVD) -- You can track your package and you can even track your pizza. Why not your absentee ballot?

Thanks to BallotTrax, that's now available in the pivotal swing state of North Carolina, where officials continue to process a record number of voter registrations (7.1 million and counting) and requests for absentee ballots (nearly 760,000 and counting).

"We hope that this tracking system will alleviate concerns," Karen Brinson Bell, Executive Director of the North Carolina Board of Elections, told ABC11. "It's going to allow the voter to receive an email, a text message, or a phone alert so that they know where their ballot is - not only as it goes out to them but also in the return to the county board of elections."

EXCLUSIVE: An inside look as Wake County absentee ballots head to mail

Though North Carolina's BallotTrax debuted Friday, it may have gotten an inadvertent boost by a controversial tweet from President Trump where he again encouraged voters to potentially vote via absentee and vote in person.

"NORTH CAROLINA: To make sure your Ballot COUNTS, sign & send it in EARLY. When Polls open, go to your Polling Place to see if it was COUNTED. IF NOT, VOTE! Your signed Ballot will not count because your vote has been posted. Don't let them illegally take your vote away from you!"

North Carolina Attorney General Josh Stein fired back within the hour encouraging voters to send in ballots early and to track it online, saying it's a felony to vote twice.

"I saw it and I read it and I was disheartened," Stein lamented to ABC11. "It's chock full of wrong and damaging information."

Courtney Parella, Deputy National Press Secretary for the Trump campaign, continued the back and forth with an emailed statement in part saying, "President Trump wants to make sure Americans who vote absentee cast their ballot early, then verify their vote was indeed counted by visiting the polls or the local registrar in-person. Ensuring your vote is counted is not a nefarious act but a basic American right, and it's very telling that Twitter would label the President's words as otherwise."

In his interview with ABC11, Stein urged voters to stick to BallotTrax if they want to legally participate in the process.

"There are definitely people in prison for voting twice in the country," he asserted. "What you want to avoid as a voter is getting anywhere near breaking the law. And you don't need to. If you are so desperate to go in person to an early voting site or your precinct to see that your vote was counted, just vote in person. Don't even send in the mail ballot. Just go in person, which is a completely obviously legitimate way to cast your ballot."

During President Trump's trip to Wilmington in early September, he appeared to encourage voters to try to vote twice to make sure the system worked properly.

Obama blasts Trump during rally for Biden in Philly 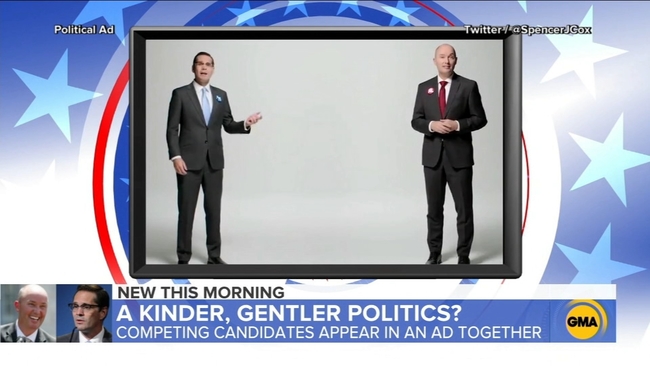 Utah rivals in governor's race unite in call for decency