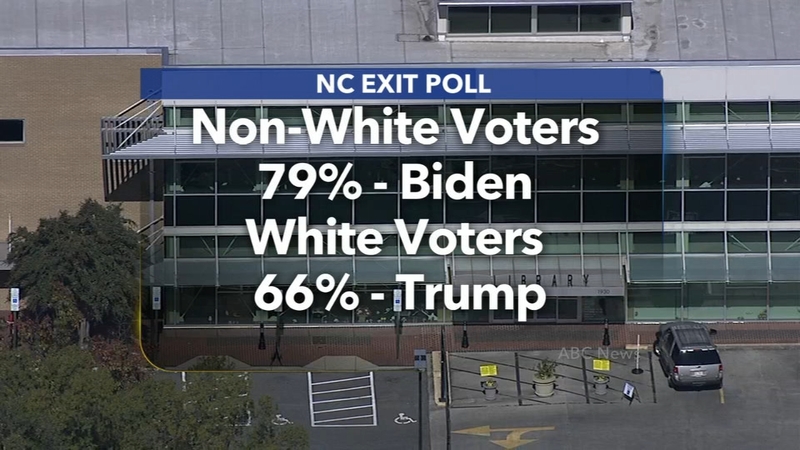 The poll asked 4,603 total voters various questions based on the issues surrounding the 2020 election and their opinions on the two candidates in the lead for US president: current President Donald Trump and former Vice President Joe Biden. Because of the unprecedented early voting turnout nationwide, the exit poll took answers from voters on Election Day, at early polling sites and over the phone to get an accurate picture of voter sentiment.

RELATED: Why the presidential race hasn't been called in North Carolina

Of five choices, North Carolina voters said the economy was the issue that mattered most to them (36%), followed by racial inequity (21%), the coronavirus pandemic (14%), health care policy (12%) and crime and safety (11%). Those that said the economy and crime and safety mattered to them tended to lean towards President Trump; those that found the other issues more important pitched their support for Vice President Biden.

While voters were close in their opinions on the economy and the pandemic, 78% of North Carolina voters agreed that racism is one of the most important problems in the United States, if not the most important problem. Among those voters, Joe Biden leads by 20 points. But of the 20% of voters that said racism is a minor problem or not a problem at all, 87% voted for Trump.

On the candidates themselves, those who said they preferred "a strong leader" favored Trump 81% to 16%, while Biden led among voters that prioritized a leader who "can unite the country", "cares about people like me", and "has good judgement".

While voters seemed to have strong opinions on the presidential election, they were evenly split on the Senate race. Each candidate for US Senate--Thom Tillis and Cal Cunningham--both received 49% of voter support.