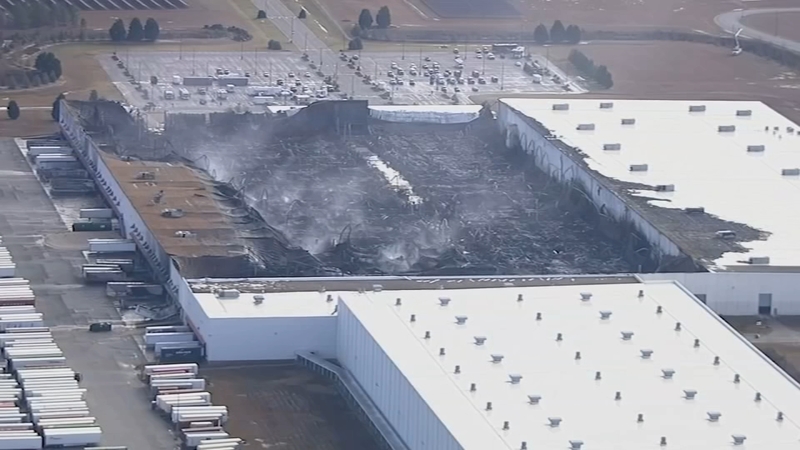 ROCKY MOUNT, N.C. (WTVD) -- Following a deadly fire in December that severely damaged its distribution center and left one worker dead, QVC has announced that it will not return to the site.

"I was disappointed with the decision, and I say that with a lot of respect and a lot of gratitude for what QVC has done for this area," said David Farris, President of the Rocky Mount Area Chamber of Commerce.

About 2,000 people worked at the distribution center, which usually hired additional part-timers around the holidays to handle a surge in orders.

A week before Christmas, a huge fire erupted at the facility, killing 21-year-old Kevon Ricks. The fire remains under investigation.

"Tragically for the community, someone lost their life. So this tragedy started for the community of Rocky Mount on Saturday when this fire began. We've got thousands of people who are now unemployed. We're here and going to do everything we can to give those folks closure on how this whole thing started," said Vincent C. Pallozzi, the ATF Special-Agent-In-Charge from the Charlotte Field Division helping oversee operations, shortly after they arrived to survey the scene just days after the fire.

Following the fire, QVC pledged to pay employees through the end of January while extending health benefits, though it had not made its long-term plans clear until this recent announcement. In a statement, it wrote:

After months of assessment and careful consideration, we have made the difficult decision not to rebuild our facility in Rocky Mount in the wake of a tragic fire in December 2021. While we will not rebuild, there has been no decision made on our future plans for the property (e.g. sell, lease).

We are grateful to the Rocky Mount community for their more than 20 years of support, especially over the challenging past few months. Since 2000, we have been a proud member of this community, working with over 70 local organizations, such as the United Way, Boys & Girls Club, and My Sister's House. The community there remains important to us, and we continue our efforts to support those impacted by the facility closure.

We have taken several other actions to support the community, which you can read more about here.

"They did a lot of research. They put a lot of time and energy into that, and we respect that. Would we love them to be here? Heck yeah. If they want to change their mind, we're open to it," said Farris.

During the past few months, grants have been used to assist affected employees with job training. Farris said more than 60% of QVC workers have since found employment elsewhere, and recent job fairs have been successful.

"The job training programs that are going on at our community college and at North Carolina Wesleyan are helping re-train that workforce," Farris said.

He estimated that about $275,000 to $300,000 has been donated to the United Way Tar River Region, funds that are earmarked to assist employees with bills.

"The amazing thing about that is, yes, we've gotten in some very generous donations, but we got in some checks early on from citizens like you and I in California, Oklahoma City, New York, and Michigan that wrote a check for that. That just shows good side of our country," Farris said.