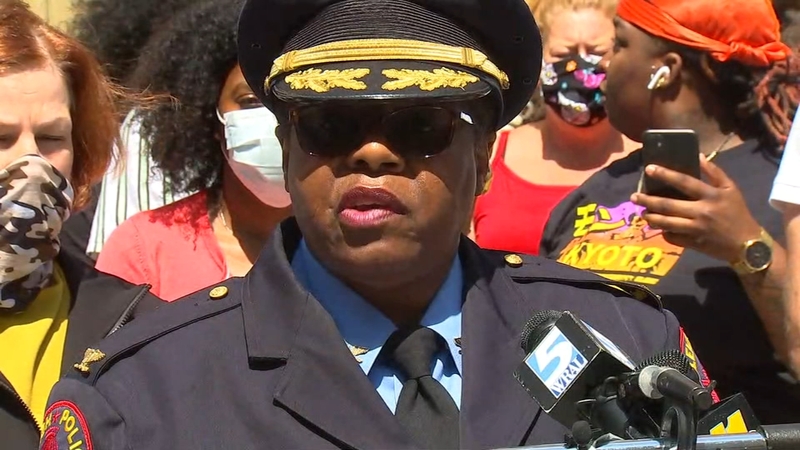 8 Can't Wait is a project by Campaign Zero created in efforts to reduce police violence through agency adoption and implementation of certain principles.

The website is searchable by city and lists eight categories to which Chief Deck-Brown addressed individually:

"Our policy speaks to chokeholds and lateral vascular neck restraint as a significant use of force and could be considered as a use of deadly force. Referenced in our policy, is to avoid it but it does not ban it," said Chief Deck-Brown. "Today, we will begin recrafting this policy to ban chokeholds and strangleholds."

Requires de-escalation
"Our policy references the need to evaluate to determine the need to escalate the force used, to deescalate used or to disengage from the use of force," Chief Deck-Brown said. "There is clearly room to improve this policy as well as there are other opportunities de-escalation may be a greater advantage where there is no issue of force at all."

Bans shooting at moving vehicles
"Our policy prohibits shooting at a moving vehicle except in limited circumstances," said Chief Deck-Brown. "For example, when there is a deadly threat from the inside of the vehicle or when an officer or third party is in the path of the vehicle and there is no availability to move outside the path of that vehicle."

Requires exhaust of all other measures before shooting
"Our policy address that officers should use a firearm as a last resort when all other means have failed or are inapplicable."

"It shall be the duty of every officer at this agency to attempt to prevent any officer from using unwarranted, reckless or excessive force. They are further directed to report the same as well."

Requires comprehensive reporting
"Incidents involving the discharge of a firearm or the use of force with or without a weapon (hands can be a weapon, body parts can be a weapon as we've seen) must be reported and documented."

"Those three areas are where we did not get the recommendation or the identification that it met their criteria," Chief Deck-Brown said.

In addition to the remaining five, the chief said the department is going to reevaluate all of its policies to ensure that they are using best practices possible.

Tuesday evening, Mayor Mary-Ann Baldwin announced RPD will adopt the 8 Can't Wait policies effective immediately and that there will be an independent group to review the police response to protests.

Baldwin also thanked Deck-Brown for "working with urgency and transparency."

With City Council support, Chief Deck-Brown announced the adoption of all #8CantWait recommendations for policing. Police policies will be posted on our website shortly for public review. The City is also engaging an independent group of to review the police response to protests. pic.twitter.com/qEUrxeEHaj