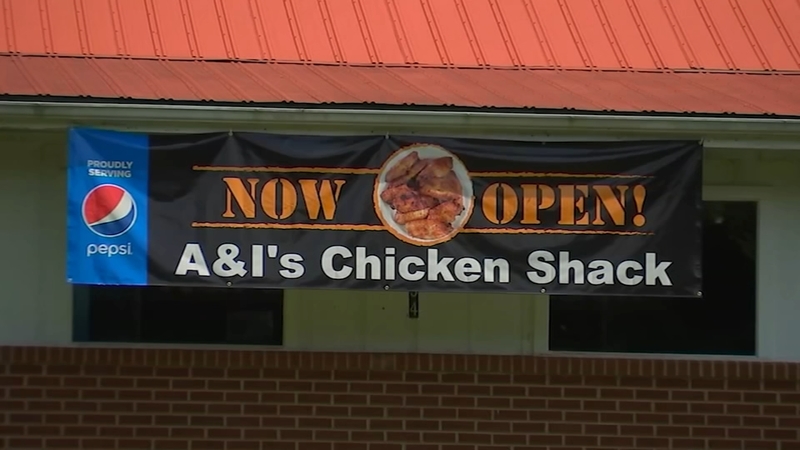 Chicken Shack owner in trouble with law himself

SILER CITY, N.C. (WTVD) -- A restaurateur who called the Chatham County Sheriff's Office after he said a racist letter threatening his business showed up in his mailbox, is in trouble with the law himself.

Andre Chaney, one of the owners of A & I's Chicken Shack near Siler City, was arrested by the same detectives investigating the source of the letter.

The day he called the sheriff's office, the investigators realized there was a year-old warrant for him out of Durham for failing to return a rental car.

Chaney said it's all a misunderstanding.

His family's car was damaged after it hit a deer and his insurance company paid for the rental car while his was being repaired according to Chaney.

But when the repairs weren't finished, the family went on vacation with the rental car.

Chaney said he thought his insurance company extended the rental and that he did turn it in when he returned from vacation.

He said the rental car company even sent him an email claiming the car was scratched and that he has paperwork showing he paid.

And, he added, that is proof he returned the car.

"We sent them a check for that and that was the last we ever heard of Enterprise. So we never heard about a felony charge for not returning a rental car on time," Chaney said Friday.

But ABC11 has also confirmed there are three outstanding felony fraud warrants for him in Lansing, Michigan.

When asked if he ever lived in Lansing he replied, "I did."

On Friday, Jane Doggett came all the way from Guilford County to eat at the Chicken Shack after reading the letter online. Many others have made similar treks.

"I was appalled by the letter and I don't want the rest of the world to think that we're all like that," she said.

Publicity surrounding the letter has prompted so many to patronize the business it has sometimes run out of food.

The letter is filled with racial epithets and threats.

"YOU WILL NOT MAKE IT HERE leave town or we will help you," the letter reads.

Also written in the screed, "...we are doing all we can to Make America Great Again and when we re-elect our president it will be an all-out war against n****s like you."

Chaney says some supporters of President Donald Trump have harassed him by phone and on social media since he posted the letter online.

"People that are calling us and saying they're Trump supporters and they voted for Trump and we're just trying to get publicity. And they're going to walk in our restaurant and we're going to eat and you're going to effin' treat us like everybody else," Chaney said. "We're getting phone calls and people harassing us all day and all night."

Although Chaney denies knowing any involvement with the letter or knowing who wrote it, at least one customer believes the charges pending against Chaney do hurt his credibility.

"Certainly it does, but I don't know that the letter has anything to do with that," Fred Judge said as he arrived at the restaurant for lunch Friday.

But he added, "I'm going to continue to support him."

And Doggett thinks to suggest Chaney had knowledge of the letter before it showed up in the mailbox is ridiculous.

"Why would he do something like that? It could have backfired on him," she said.

However, even Chaney understands why some might question his credibility.

"Right. I do. I understand," he said. "At the same time, it has nothing to do with what we got in the mail, what was in our mailbox."

He continued, "It takes away from what happened to us because what happens so many times not with just me but just all across America what happens so many times is something happens and the first thing that's looked at is, let's see what's bad."
Report a correction or typo
Related topics:
siler citychatham countyncracismrestaurantfraudwarrant arrests
Copyright © 2021 WTVD-TV. All Rights Reserved.
TOP STORIES
3 dead, 2 missing as tubers go over dam near NC-VA border
Merging where the lane ends not 'jumping the line'; may become the law
2 dead, 2 injured in Durham shooting; activists say city needs to step up
Help name red wolf pups born at NC Zoo
Despite incentives, fewer North Carolinians vaccinated each week
Tropical Storm Claudette expected to form today
Sheriff IDs pilot killed when airplane crashes in Kinston
Show More
Triangle residents call Juneteenth a reminder to educate oneself
Spring Lake first municipality in Cumberland County to make Juneteenth official holiday
LATEST: Gov. Cooper urges more people to get vaccinated
Cary dad's Facebook group, Dads Married to Doctors, grows globally
Father gives daughter life-saving gift as living organ donor
More TOP STORIES News