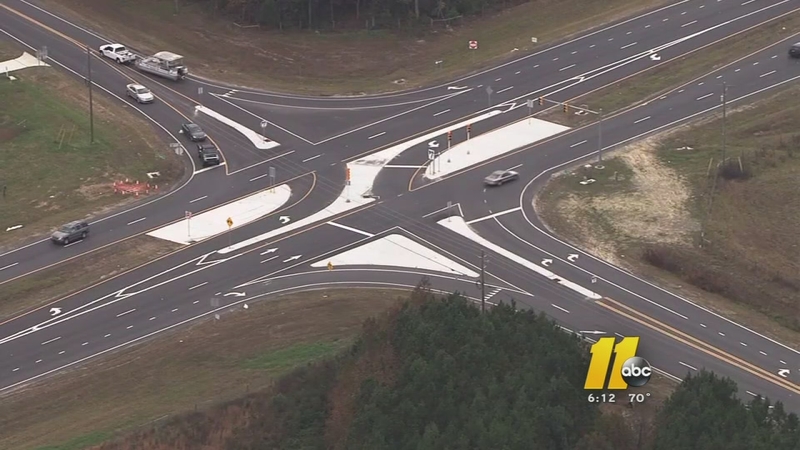 ROLESVILLE, N.C. (WTVD) -- The 401 Bypass has been open for almost four months, but it "officially" opened Friday with the snip of a half dozen ribbons.

Department of Transportation Secretary Nick Tennyson and a couple dozen local officials gathered along the bypass this afternoon to celebrate the now-open, new road.

But at one key access point coming out of Rolesville, drivers and residents are already complaining.

When the road opened in July, town officials said they'd been led to believe there would be a stoplight at the intersection of E. Young St. and the 401 bypass.

The DOT maintained it was always planning on just a stop sign - but the controversy ended when the DOT agreed to put in an electric stop light.

But four months later, it's still a stop sign. And people who use and live near the intersection say that's causing big problems, both in terms of traffic and safety.

"There's triple the traffic on the road before there was the crossing here," said Edward Pulley, who's lived on the corner for decades. "At certain hours of the day, I've got two driveways here and it's hard for me to even get in the road."

Just last month, there were three accidents at the intersection; fender benders, but drivers worry they could have been worse.

Many blame the problem on the intersection itself. It's not a standard four-way intersection, and many say it's confusing for drivers and could lead to more accidents.

DOT Secretary Tennyson says the intersections are actually designed for safety. "This street design cuts down by 75 percent on fatality and injury crashes."

And going back to that light, DOT Engineer Brandon Jones says the delay comes down to the fact they hit hard rock a few feet down.

"To get the signal poles that hold up the signals," Jones said, "you have to drill into the earth and there's rock under the earth, so the contractor putting in the lights has to get a special contractor in to drill through the rock."

Jones said the stoplight should be installed by mid-December.