ABC11's Kaplan: Cooper vs. NCGA saga is all about the basics 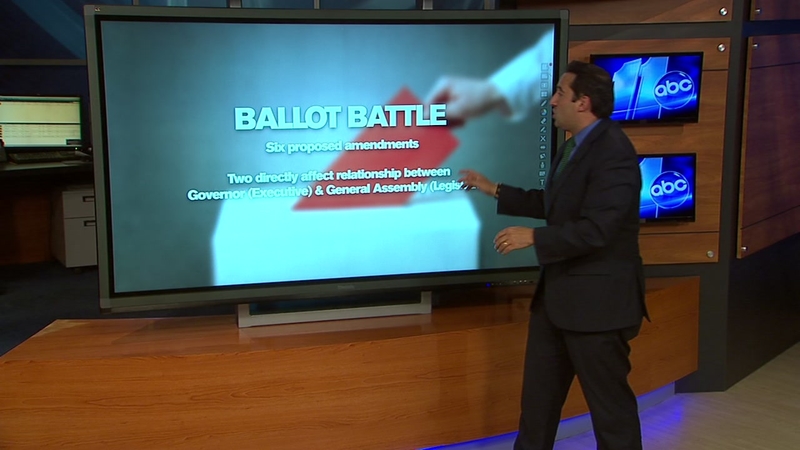 Ballot battle: Jonah Kaplan makes sense of it all

RALEIGH, NC (WTVD) -- It's easy to get lost in the weeds, especially when the current events of North Carolina's state government more likely resemble a thicket of partisan platitudes and judicial jargon.

The rivalry between Gov. Roy Cooper, a Democrat, and the Republican-led General Assembly, is at its core a simple battle between two separate branches of government - a battle that reflects the very principles upon which the Founding Fathers inscribed in the Constitution.

"A representation of the people in one assembly being obtained, a question arises whether all the powers of government, legislative, executive, and judicial, shall be left in this body?" John Adams wrote in 1776. "I think a people cannot be long free, nor ever happy, whose government is in one Assembly."

What you need to know about the proposed new amendments

North Carolina has its own constitution, which enshrines the Separation of Powers in Article 1, Section 6: "The legislative, executive, and supreme judicial powers of the State government shall be forever separate and distinct from each other."

Though Cooper and Republicans have squared off in court before, this new chapter in the saga directly involves voters since voters are the ones who ultimately have the power to amend, or change, the North Carolina State Constitution.

At the end of the 2018 Legislative Session, the General Assembly passed six proposed amendments to appear before voters on the November ballot, and the following is exactly how they are to appear on the ballot:

Constitutional amendment to strengthen protections for victims of crime; to establish certain absolute basic rights for victims; and to ensure the enforcement of these rights.

Constitutional amendment to reduce the income tax rate in North Carolina to a maximum allowable rate of seven percent (7%).

Constitutional amendment protecting the right of the people to hunt, fish, and harvest wildlife.

Constitutional amendment to require voters to provide photo identification before voting in person.

Constitutional amendment to implement a nonpartisan merit-based system that relies on professional qualifications instead of political influence when nominating Justices and judges to be selected to fill vacancies that occur between judicial elections.

Constitutional amendment to establish a bipartisan Board of Ethics and Elections to administer ethics and election laws, to clarify the appointment authority of the Legislative and the Judicial Branches, and to prohibit legislators from serving on boards and commissions exercising executive or judicial authority.

These questions, however, are only a small part of the greater legislation that comes with an amendment approved by voters. The November ballot will not include the actual statutes and provisions that will change if voters approve the constitutional amendments.

While the ballot language for amendments on voter identification and income tax cap may be clear, for instance, less is known about what exactly constitutes a "nonpartisan merit-based system" or what it means "to clarify the appointment authority", as the questions read in ballot questions 5 and 6.

Indeed, a deeper reading into both Senate Bill 814 (Judicial vacancies) House Bill 913 (Board of Ethics & Enforcement) show the extent to which the proposed amendment would give more power and authority to the General Assembly - powers that traditionally have belonged to the Governor. In fact, the language in HB 913 would mean that the General Assembly, and not the Governor, would "control the powers, duties, responsibilities, appointments, and terms of office of any board or commission prescribed by general law."

In SB 814, the amendments read that Governor can appoint a nominee to a judge or justice position - but only from a list of candidates chosen by the General Assembly.

To help voters better understand issues on the ballot, current law requires a three-member Constitutional Amendment Publication Commission to consider the caption above the question on the ballot, which could either summarize the proposal or simply give it a label. The commission has been accepting public comments before an August deadline.

Additionally, the commission writes separate summaries available to voters before the election that explain the amendments - including the statutes that would change and how that would affect North Carolinians in the future.

Before the commission could even announce its decision on captions, Republicans hastily called a Special Session and passed a bill taking that power away from the commission and mandated the only caption that can appear on the ballot must read "Constitutional Amendment."

Governor Cooper vetoed that bill, but Republicans had enough votes in both the House and Senate to override that veto.

Despite the new law limiting its powers, the Constitutional Amendment Publication Commission still held its scheduled meeting on July 31. According to ABC11's partners at the News & Observer, the two Democrats on the commission were the only ones to attend, and both voiced harsh rebukes on some of the amendments.

As the N&O reported, Josh Stein said the amendments would mean "the most radical restructuring of our government in more than 100 years, since the Civil War. It would essentially give the Legislature the power to run the executive branch."

Secretary of State Elaine Marshall, meanwhile, criticized what she considered an inconsistent message between the question on the ballot versus the actual result of the proposed amendment and likened the situation to "a Trojan horse or a pig in a poke."

Echoing those sentiments, Cooper filed a lawsuit in Wake County on Monday, and is legally challenging the constitutionality of SB 814 (Judicial Vacancies) and HB 913 (Elections and Ethics Board). Among other things, the complaint argues that the amendments "would take a wrecking ball to the separation of powers", "would rewrite bedrock constitutional provisions" and "eviscerate the Governor's constitutional authority."

Additionally, the complaint alleges that the ballot questions related to the amendments violate the constitution by "misleading" voters in that they "do not fairly and accurately inform" them on what the proposed amendments would accomplish.

If the governor wins the suit, the proposed amendments and their assigned questions would be removed from the ballot.

The NAACP and Clean Air Carolina filed a separate lawsuit as well, with added arguments against the proposed amendments on voter ID and income taxes.

The office of Senate President Phil Berger (R-Rockingham) responded on Monday by calling both lawsuits "absurd." In a statement to ABC11, spokesman Bill D'Elia said the lawsuits create "an emergency of their own making, and have taken then shameful step of attempting the get an activist judge to take away the right of North Carolinians to amend their own constitution."
Report a correction or typo
Related topics:
politicsraleighwake countyncstate politicsgeneral assemblyroy coopernorth carolina news
Copyright © 2021 WTVD-TV. All Rights Reserved.
TOP STORIES
FBI to give update on search for Brian Laundrie | WATCH LIVE
NC State student dies after being hit by car near campus
Gas prices rising nationally, in Triangle: Here's why
'I still have questions:' Families mourn teens killed in wreck
LATEST: US expected to authorize mix-and-match booster shots
White House details plan to roll out COVID vaccines for younger kids
Show More
Enrollment proposal information sessions begin for new WCPSS schools
Americans arrested for trying to board flight in Switzerland
These grocery items are about to get more expensive
Free college proposal likely to be dropped from Biden's spending plan
Husband charged with killing Maya Millete, who vanished in January
More TOP STORIES News