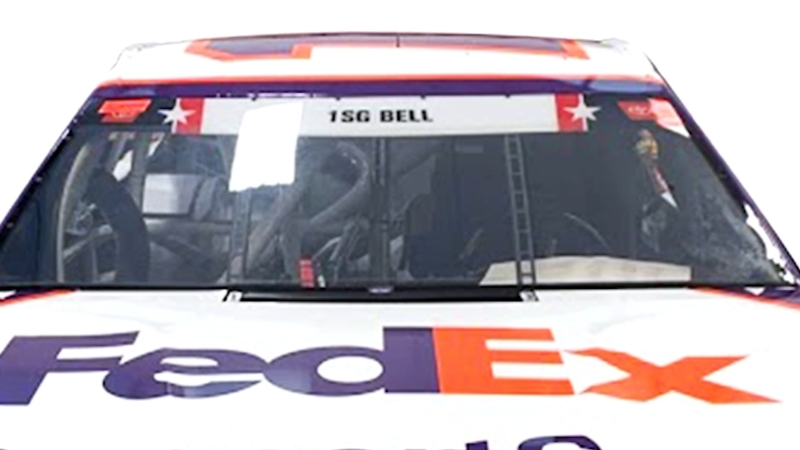 SPRING LAKE, N.C. (WTVD) -- First Sergeant Russell Bell was killed in action in Afghanistan after an IED exploded in 2012. This Memorial Day weekend, NASCAR paid tribute to Bell for his service and sacrifice.

For 60 years, the Coca-Cola 600 has been held at the Charlotte Motor Speedway during Memorial Day weekend.

One effort that's a part of the race is the 600 Miles of Remembrance, which is NASCAR's longest race.

Each driver honors a fallen service member with their name across the race car windshield. Daytona 500 winner Denny Hamlin drove car number 11 with First Sergeant Russell Bell's name on it.

"I was very proud that Russell's legacy continued and that people still remember," said Latoya.

Three years into the marriage, Russell deployed to Afghanistan. While he was overseas, he stepped on an IED. She said the past eight years have been difficult without him because she's had to raise Gage on her own.

"He's missed his first day of school. All that special stuff without him. When he has games, other fathers are there and then it's just me," said Latoya.

Family members of those being honored received gift boxes from both NASCAR and Joe Gibbs Racing since they weren't able to attend Sunday's race.

Because of COVID-19, there were no fans in the stadium. Bell's mother traveled from Tyler, Texas to be here.

"It was a great honor to be here with them," said Liz Bell. "It was kind of fun to watch."

Hamlin placed 30th in the race after a part flew off his car. Still, the Bell family is grateful their hero is being remembered this Memorial Day.