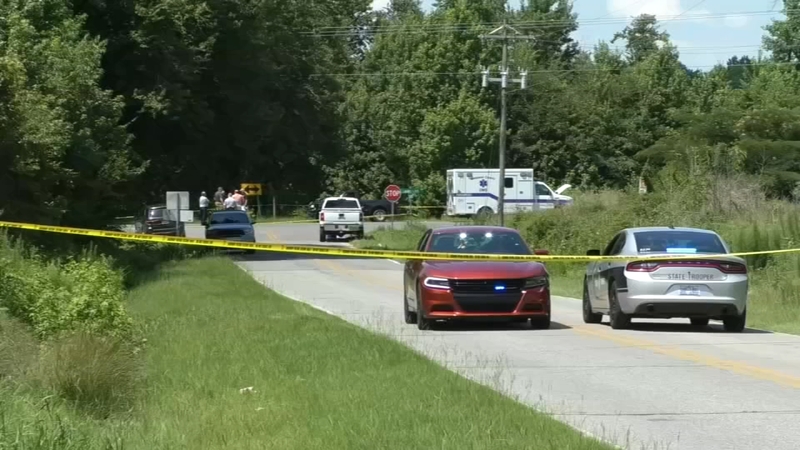 The shooting occurred just before 1:10 p.m. along Laurel Lake Road at the intersection of Lakewood School Road.

Authorities said the deputy was conducting a traffic stop on a pickup -- that's when they encountered an armed suspect which led to the shooting.

The sheriff's office said life-saving measures were attempted on the suspect, identified Monday as Craig Locklear, 49, of Laurel Lake Campground in Salemburg. However, he died at the scene.

Cumberland County deputies were pursuing a white van on NC 24 and suspected the driver was impaired.

A DMV check of the van's license plate indicated that it belonged to Locklear. Deputies said Locklear was also wanted in Cumberland County for numerous domestic violence charges.

Both Sampson and Cumberland deputies pursued the van east on NC 24 toward Clinton. The van turned onto Old NC 24 and traveled west toward Bonnetsville, where deputies used stop sticks to disable the van near Peavine Road.

Deputies said Locklear, ran from the van and was seen with a handgun as he fled into a wooded area.

Deputies used K-9s and drones to search for several hours but could not find Locklear, who had an extensive criminal history, the sheriff's office said.

Just before 1:10 p.m. Sunday, a Sampson County deputy saw a suspicious pickup leaving Laurel Lake Campground. The deputy stopped the vehicle at Lakewood School Road and Laurel Lake Road and as he approached the stopped vehicle, Locklear, who was hiding in the bed of the truck, emerged and pointed a .357 revolver at the deputy.

The deputy fired at Locklear, killing him.

The State Bureau of Investigation was called in to conduct the investigation into the officer involved shooting, which is standard in North Carolina.