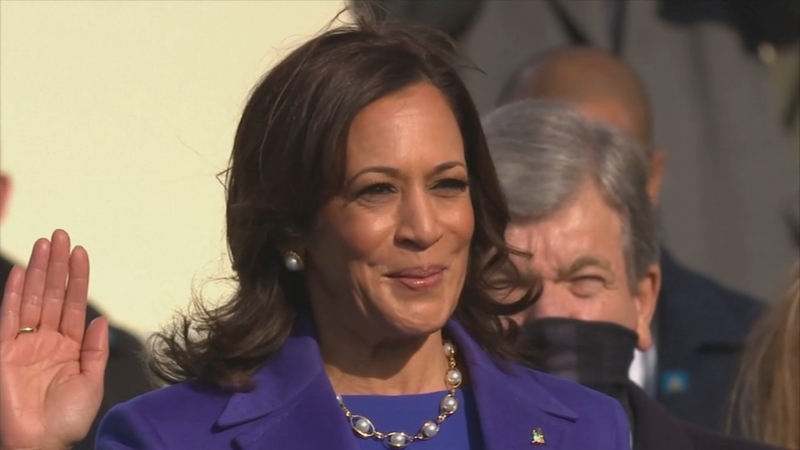 RALEIGH (WTVD) -- Shaw University in downtown Raleigh may be 270 miles from Washington D.C., but the pride many of the students here at the oldest historically Black university in the south were feeling on Inauguration Day made them feel closer than ever. One of their own, an HBCU grad, is now the second-highest officeholder in the land.

As Vice-President Kamala Harris was sworn into office -- fist-bumping in celebration with President Joe Biden; they were beaming back on campus at Shaw.

"Personally, I can't find the words for what I feel," said Shaw sophomore Jameliah Pinder, as she went on to describe the pride over an achievement she's never seen before: The first woman vice-president, the first Black woman, the first of south-Asian descent. And, maybe most-inspiring, as an alumna of Howard University in Washington, Harris became the first graduate of a historically Black college or university to ascend to the White House.

"I feel it's a change for people of color -- for women," said one Wake County mom. "That this land, regardless of skin color, was made for you and me."

"It's crazy! It totally is. The HBCU community is so small, but also having a big impact in this world," said Shaw first-year student Robert Sheppard. "So being inside her shoes, well, where she used to be, is awesome."

The newly-minted vice-president didn't attend Shaw but when she made a campaign swing through the Triangle last fall she made sure to put Shaw University on the itinerary. She talked to ABC11 during the visit as she stumped for votes.

"We are gonna do everything we can to earn the vote of every North Carolinian," Harris said then.

Congratulations to Kamala Harris, the highest-ranking female elected official in U.S. history, the First Woman, the First African American and the First Asian American to be sworn in as the Vice President of the United States.#ShawUInaugurationWatchParty #Inauguratiton2021 pic.twitter.com/fqTSIv4Ye7

The Biden-Harris ticket did not win North Carolina. But she succeeded in elevating the stature of HBCUs.

"It's almost like HBCUs are looked down on," said Pinder. "But the truth is HBCU's produce the best at the end of the day. HBCUs are it! I can't express that enough."

As Howard University's "Showtime Marching Band" paraded down Pennsylvania Avenue for the inaugural parade, it was a moment of pride for Howard, but also a pride among all the remaining HBCU's.