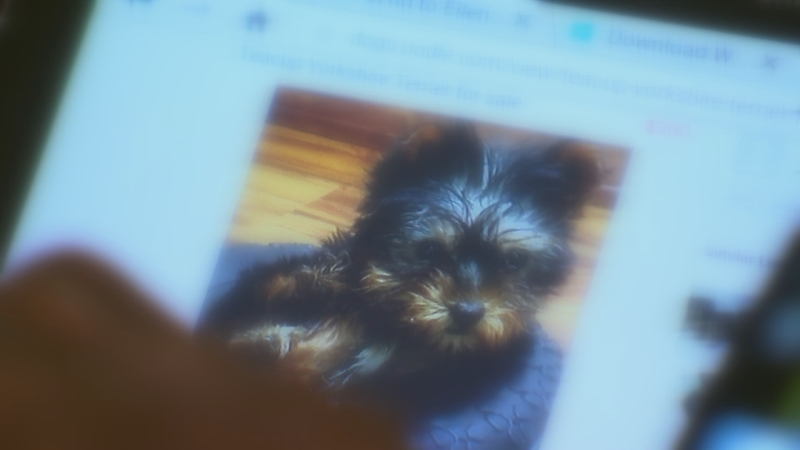 RALEIGH (WTVD) -- Buying a new puppy should be simple: you find the one you want and you pay to bring him home. But it didn't happen that way for one local family.

Seven year old Deziyah Benson was excited to get her birthday gift from her great grandmother Penny Glenn. It was going to be a new puppy, a Yorkie they found online.

"Because he was small," Deziyah said.

Glenn responded to the ad and texted back and forth with the pup's owner who Glenn said texted her pictures of the dog.

"She said that the puppy was free but all we had to pay for was the shipping," Glenn said.

The puppy was in Georgia and the trip to Raleigh would cost $300.

"Three hundred dollars for a Yorkshire Terrier was a good price comparing to what was on the Internet. I never thought it was a scam. I never saw it coming," Glenn said.

Feeling good about the deal, Glenn followed the instructions from the owner and wired $300 to the owner's husband.

She thought the puppy would soon be on a flight to Raleigh; until she received text messages saying there was a problem.

"There was something wrong with the crate. The crate was not the right crate and they had to get another one. Then she said it had to be insured and she said they need $750 more," Glenn said. 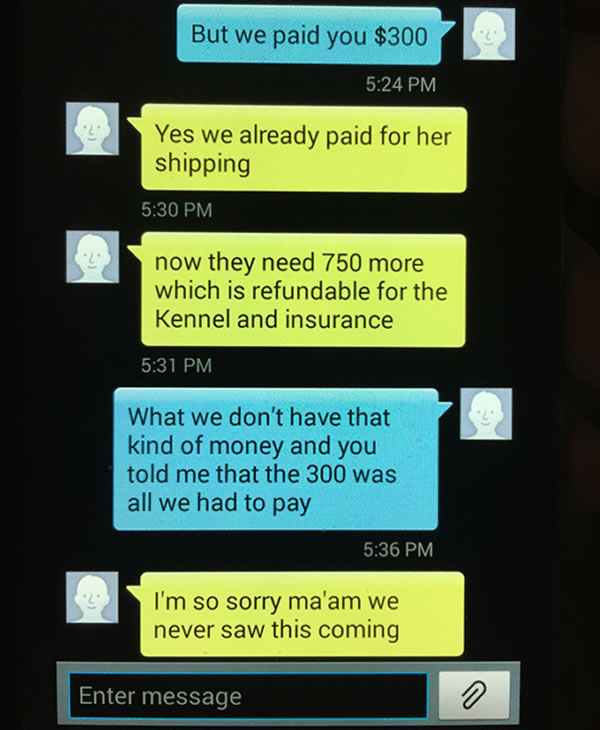 "When they didn't give me the flight reservations and when she started asking for money, that's when I told my husband, 'Baby, we're being scammed,'" Glenn said.

Glenn is crushed there is no puppy, and that she is out of hundreds of dollars, but now she wants others to know not to fall for the same scam.

The best advice: any time someone you don't know asks you to wire money, then 99.9 percent of the time it's a scam. The same goes if they ask you to buy a pre-paid debit card.

Also, if you're looking for a new pet, local shelters like the Wake County Animal Center and the SPCA of Wake County are packed right now with animals who need a good home, and it won't cost you hundreds of dollars.

While the puppy scammer isn't talking to Glenn anymore, when I texted from a different phone number, she texted back the puppy is still available and free, I just have to pay shipping.

How to prevent being scammed:

1. Examine the pictures of the puppy very closely to make sure they are original. You can search images on Google to see if the photo comes up anywhere else on the Internet. If it does, chances are they stole the photo and are using it to scam people.
2. Request additional pictures of the puppy. If the seller actually owns the puppy, they should be able to send you multiple pictures from different angles as well as pictures of the puppy at a younger age.
3. Never wire money to a seller. Scammers use this method so they cannot be traced once the money is received. Scammers also use pre-paid debit cards.
4. Google the name and email address of the seller. If they are scamming you, chances are they have scammed someone else.
5. If the deal is too good to be true, it normally is. Certain breeds of dogs are extremely expensive and it is unlikely they would be sold for little to no cost. Do your research.