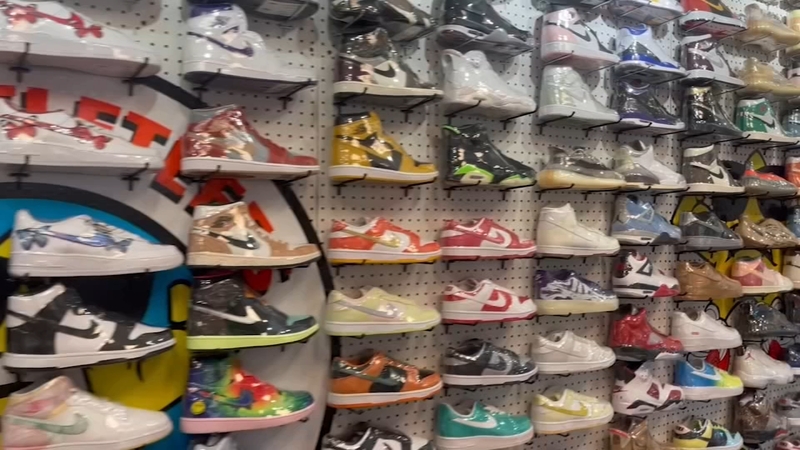 DURHAM, N.C. (WTVD) -- Just days after headlines about chaotic violence at The Streets at Southpoint, one of the mall's few Black-owned businesses was informed that its license to operate at the mall was being canceled. Michael Phillips has six more days to shut down his popular specialty store, Sir Castle Tees.

Phillips suspects the mall is singling him out because of the negative publicity.

"The store is doing fantastic," said Phillips, the southeast Raleigh-raised entrepreneur who more than met expectations after opening Sir Castle Tees at Southpoint last June. "Over the six months period of time we've been here, we made over $1 million at Southpoint mall. We are definitely the hot commodity because we do everything that everybody wants on the internet."

“When I got that letter, I was really hurt.”

"When I got that letter, honestly, I was really hurt about it," he said.

It was an email from mall management informing Phillips that his operator license is being terminated. The store and its 20 employees have to go by Jan. 11. No reasons were given in the termination letter. Phillips called the management office.

"She said, 'Well, we are looking to get rid of a few shoe stores. And we're going to get started with you.'" Phillips recalled. "So to me, it just felt like that it was something deeper than just the whole shoe portion."

Southpoint's mall directory lists 11 shoe stores. Sir Castle Tees is not one of them. It's listed as a specialty store.

Phillips suspects his business is being singled out after those frightening few days at the mall during the holiday shopping season: A triple shooting on Black Friday caused chaos and a raucous fight in the food court came just days later.

"I'm thinking the property owner is probably looking at it like, hey, so this is a really popular African-American male here. We may feel like he's the reason or the cause of the things that may have been occurring with the younger crowd," he speculated.

The Black-owned business believes it’s being unfairly singled out after Southpoint became the scene of several violent incidents during the holiday shopping season.
We’ll talk to Phillips and mall management at 11 • #abc11 pic.twitter.com/I2VCEUhHBT

"(Brookfield) wanted to give all this money so African Americans and minorities can open up businesses here," Phillips said. "And for them to just say hey, you got 15 days to get out -- it's just kind of sad that they just want to just do this to me for no logical reason at all."

ABC11 reached out to Southpoint's parent company for more specifics on the termination decision.

A company spokesperson said, "All short-term licenses permit termination, and termination is not uncommon for these types of agreements. Because we do not discuss tenant or licensee matters, we are not able to comment on the specific circumstances of their departure."

Phillips' business was not part of the Partner to Empower program. When ABC11 asked Brookfield how many Black and minority-owned businesses had been helped by the program so far, the company did not respond.
Report a correction or typo
Related topics:
businessdurhambusinesssmall businessmallblack owned businessstore closingsmall business survival
Copyright © 2022 WTVD-TV. All Rights Reserved.
TOP STORIES
Winter storm moves out, refreeze possible overnight
NCSHP reports 200 crashes statewide, urges drivers to stay home
Monday events canceled, postponed due to winter weather
Why do we get freezing rain instead of snow or sleet?
FBI identifies hostage-taker at Texas synagogue
How to drive on snow, ice and get out of a skid
Expect more worrisome COVID variants after omicron, scientists say
Show More
After Biden's first year, the virus and disunity rage on
Novak Djokovic leaves Australia after court rejects visa challenge
Ukraine claims Russia behind cyberattack in 'hybrid war'
Hostages in N. Texas synagogue 'out alive and safe,' Gov. Abbott says
Man shot, killed by officer at Duke University Hospital
More TOP STORIES News