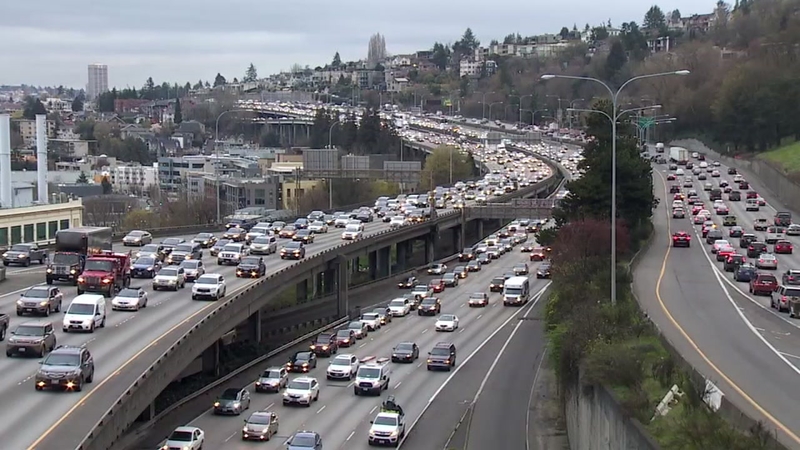 RALEIGH (WTVD) -- Amazon HQ2 or not, the Triangle is already expanding.

Indeed, Raleigh is already counted among the best places for business and career, best places to raise a family and the best cities for Millennials. Based on population numbers, Wake County was the 20th fastest growing county in the United States between 2010 and 2017.

RELATED: Seattle resident on Amazon HQ2: 'Be careful what you wish for'

"There was a lot of vision. When someone thought of Research Triangle Park when people thought, 'who could accommodate that?'" Mindy Oberhardt, a veteran real estate agent in the Triangle, recalls to ABC11. "I mean it's very exciting when I drive to places like Holly Springs to Chatham County or go north out to Rolesville. There is increasing infrastructure there."

Oberhardt, who moved to Raleigh from New York more than 30 years ago, says it will take "visionaries" to prepare the Triangle for the kind of growth that would come from Amazon building a new headquarters in the Raleigh-Durham area. According to Amazon, the company's new headquarters - dubbed "HQ2" -- will be a full equal to its current campus in Seattle, home to 45,000 employees and 8.1M square feet of office space - and counting. After reviewing hundreds of submissions from cities large and small, Amazon announced earlier this year its short list of 20 finalists. The decision is expected later this year, and if the Triangle is chosen it could have a far-reaching impact on everyone in the community.

"My concerns are roads," Oberhardt said. "We're already getting overcrowded. I'm from New York and I don't want the kind of gridlock I had when I grew up. There really has to be, as there is trending, more thoughtful planning."

In an earlier ABC11 investigation, the I-Team pieced together the most comprehensive report available on the Triangle's growth in housing and analyzed the data to forecast what might affect home prices and property values in the near future.

In this report, the I-Team also devoted its full attention and resources to Wake County, which according to the U.S. Census Bureau is home to at least 1.05 million people - fewer than 10,000 short of being most populous in the state, behind Mecklenburg (Charlotte metro area). We also narrowed our focus on data which dates to Jan. 1, 2010, or right after the mortgage crisis, and surveyed only single-family lots and townhomes; multi-family housing, including apartments, were not included.

In Raleigh, the county's largest municipality, the Development Services Department approved 279 subdivisions (4,438 homes). Still, those numbers do not match the construction in the booming suburbs, including Apex (62 subdivisions, 7,851 homes) and Wake Forest (39 subdivisions, 6,766 homes).

The increased supply, however, has not necessarily leveled the market; Home prices are growing even faster in Wake County, fueling worries about an out-of-control seller's market. According to Zillow, the median home price in Raleigh is $314,900, up 16.9% since last year. In other Wake County communities, the percentage of growth is smaller, but the median home prices in those areas are much more expensive: Apex, $399,000; Cary, $419,900; Wake Forest, $371,900.

"Right now it's very challenging for realtors and buyers because we are having tremendous difficulty particularly with our first time home buyers," Oberhardt says. "It's young Millennials with jobs and they don't have a lot of money saved. It's physicians working at Duke and UNC. I have the opportunity to work with them - it's a bear."

A rising population of residents also means a rising enrollment in our area's school districts.

WCPSS currently lists as many as 39 new schools under construction or slated for design and construction through 2026, meaning school assignments will continue to see dramatic change during the next decade.

Bill Fletcher, a member of the WCPSS School Board, says his colleagues must think more creatively as the district grows even more, especially should Amazon HQ2 move in.

"What if we build a school and put affordable housing on two floors above the school," Fletcher proposes to ABC11. "That's another need our community has. A smaller footprint, shared athletic facilities or no athletic facilities. A program that attracts students who may not care about athletics for example. Maybe a tech oriented program or a medical sciences program."

As to what the district would ask of Amazon should the tech giant choose the Triangle, Fletcher says he envisions a positive relationship.

"I think the point being we know where we're going as a school district. Come on and go with us. I don't know what they would ask that would take us from our goal of educating every child to be successful when they leave us."

Though the area's politics may be divided, there's a universal apprehension to increasing gridlock in all parts of the Triangle.

According to the North Carolina Department of Transportation, lawmakers have earmarked at least $2 billion over the next three years for capital improvement projects, such as the I-540 Southern Wake Freeway/Triangle Expressway Southeast Extension.

Joey Hopkins, NCDOT's Division 5 Engineer, tells the I-Team there's a full 10-year-plan detailing projects large and small throughout the area designed to alleviate many of the Triangle's own growing pains.

"One of the big things that will go to that is expand our bus service in Wake County four times," Hopkins adds, referring to the Wake County Transit Plan approved by voters in 2016. "That's more buses, more frequent buses, better buses, more routes. Another part of that is bus rapid transit."