'President Trump will nominate and I will support': Tillis on Trump's decision to fill Supreme Court seat 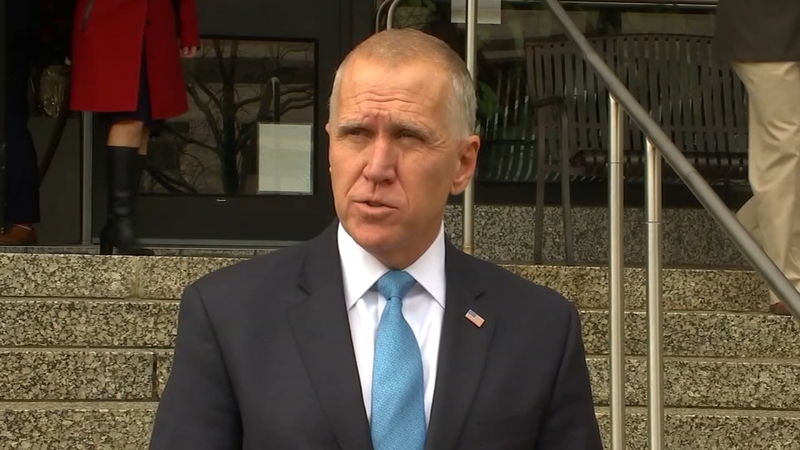 Less than 24 hours after the passing of Supreme Court Justice Ruth Bader Ginsburg, Sen. Thom Tillis released a statement on Saturday in support of President Trump's choice to fill the vacancy within the Supreme Court.

"Four years ago, a Supreme Court vacancy arose under divided government and a lame-duck president as Americans were choosing his successor. Today, however, President Trump is again facing voters at the ballot box and North Carolinians will ultimately render their judgment on his presidency and how he chooses to fill the vacancy.

Justice Ruth Bader Ginsburg died Friday from complications from pancreatic cancer. With 46 days until the election, what's next for the Supreme Court?

His statement in contrast to a comment made in 2016 shortly after the death of Justice Antonin Scalia under the Obama administration saying, "The process of filling the Supreme Court vacancy would be best left to the next President."

After the death of Justice Antonin Scalia in 2016, Sen. Tillis is on record saying, “The process of filling the Supreme Court vacancy would be best left to the next President.”

Tillis’ statement from when Obama was POTUS is polar opposite of his stance today. #ABC11 https://t.co/nVy2AIukvN

Tillis' Democratic challenger Cal Cunningham writing a completely opposite statement that supports "the next President and next Senate" to fill the vacancy.

"North Carolinians are already voting and will continue to do so in the coming weeks," Cunningham wrote. "They deserve that opportunity to have their voices heard, and then, it should be up to the next President and next Senate to fill the vacancy on our Court."