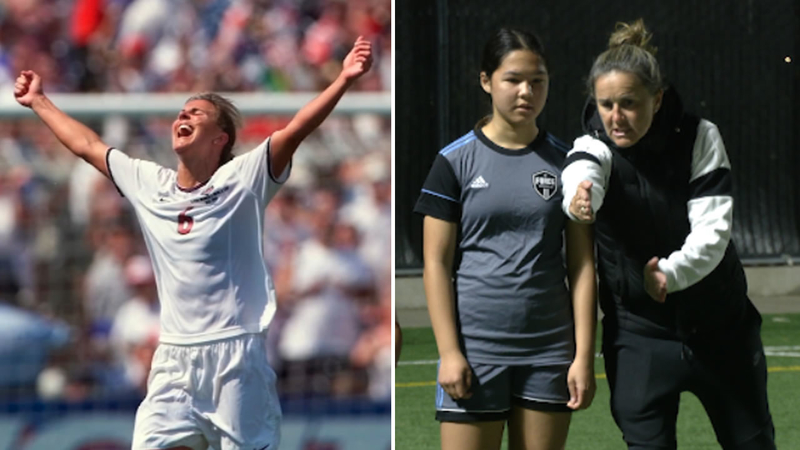 SANTA CLARA, Calif. -- Fifty years ago, Title IX was a revolutionary civil rights law that was passed to level the playing field for women in sports and in life.

One of those legendary female figures is Bay Area native Brandi Chastain, regarded as one of the best athletes of all time. She says the work for positive change is never finished.

There are many aspects of life that are very important to the soccer legend, but something has seemingly always been at the center: soccer.

"I got to participate and play and be challenged and be competitive," Chastain said. "And that led me to so many incredible lifetime opportunities, the Olympics, the world cups, playing here at Santa Clara University and now I get to use that platform to do good in our community."

Chastain coaches club and high school teams in the Bay Area and is a co-founder of the Bay Area Women's Sports Initiative (BAWSI).

It's true, the grit and determination she says she learned from her parents could've allowed her to find success in her life.

But, 50 years ago, the landmark civil rights law Title IX allowed her and women across the country the clear path for triumph.

"I'm floored at what women are doing," Chastain said. "Whether that's in STEM, medicine, sports or business, women are all everywhere showing their strength. We've come a long way, but we're only scratching the surface because this 50 years feels only like the beginning right now."

Title IX is the law requiring equal opportunity under any education program or activity regardless of gender.

It's a journey that dates back five decades, but significant milestones along the way have only built upon the original success.

"We look back to 1999 and the Women's World Cup down in Pasadena and obviously that was a ground-shaking moment," Chastain said. "To see a women's event on that stage, with that capacity, with that attention, had never happened anywhere. It just captured the imagination, the hearts and the minds to say, 'women's sports matters'."

Chastain hopes that World Cup victory paves the way for the next ground-shakers like the U.S. Women's National Team earning equal pay and women becoming leaders in their field, even becoming vice president.

"For me, Title IX has never been about being perfect," Chastain said. "It's about the exploration of one's self and one's potential and the impact that you can have. We are change-makers, we are positive disrupters of cultural change. I hope everybody feels they can be part of something like that and if you don't feel like you're a part of it, find me. You can join my team."

As Chastain mentioned, the work is not done. Fifty years of Title IX is not the end, it's only the beginning.

ABC Owned Television Stations and ABC's Localish present 50 inspiring stories from around the country for Fifty/50, as part of The Walt Disney Company's monumental initiative highlighting the 50th anniversary of the passing of Title IX, the federal civil rights law that prohibits sex-based discrimination in any educational institution that receives federal funding, and gave women the equal opportunity to play.