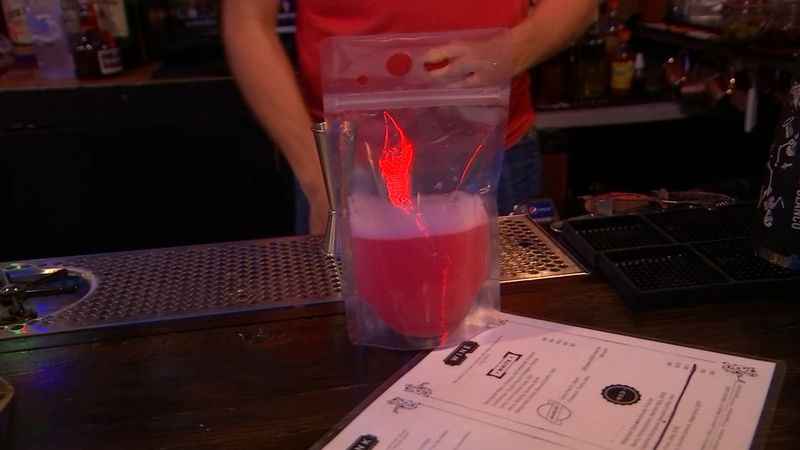 Allowing people to take drinks home, the order argues, would help reduce the number of people gathering in bars and restaurants and would allow the businesses to increase their revenue.

"This order will help people avoid settings that can contribute to increased viral spread while giving restaurants and bars a financial boost that they need right now," said Gov. Cooper in a written statement. "With cases and hospitalizations high around the country, let's all do our part to slow the spread of COVID-19 while supporting local, small businesses safely."

And even though Cooper's current executive order ends on-site alcohol sales at 9 p.m., the order allows businesses to continue selling alcohol until the time set by county and state laws.

"For example, if laws establish that alcoholic beverage sales end at 2 a.m., a permitted seller could sell a mixed beverage for delivery or off-premises consumption until the establishment closes, and no later than 2 a.m.," the order reads.
RELATED: What you need to know about North Carolina's stay-at-home order

The order also allows for the mixed drinks to be delivered, either by restaurant employees or a third-party delivery service, however, the deliverer must be over 21 years old and only one drink per person can be ordered for delivery. Deliveries will not be allowed at university residence halls or to any place where the sale or possession of alcohol is not approved.

Triangle restaurant owner Gaurav G Patel, president of Eschelon Experiences, said the order could be a huge help to the industry.

"I do feel like it's gonna be helpful. Obviously, any little bit helps, especially when it comes to the bar," Patel said. "There's definitely some nuances that are in there that, you know, if you read it carefully and pay attention, that could really help the restaurant and bar industry over the next 60 days."

As of August, at least 33 states and the District of Columbia were temporarily allowing cocktails to-go during the pandemic. Only two - Florida and Mississippi - allowed them on a limited basis before coronavirus struck, according to the Distilled Spirits Council of the United States.

Struggling restaurants across the country have said it's a lifeline, letting them rehire bartenders, pay rent and reestablish relationships with customers.

The restaurant industry in the U.S. has permanently lost more than 110,000 eateries and drinking establishments.

According to a survey from the National Restaurant Association, as of Dec. 2, 17 percent of establishments in the industry have either closed permanently or had long-term closures.

The U.S. government hasn't released preliminary drunk driving data for 2020. But Jonathan Adkins, the executive director of the Governors Highway Safety Association, said there's no anecdotal evidence that drunken driving has spiked during the pandemic.

"This pandemic has had me in such a bad place. I thought I was going to lose it. I mean no one is prepared to have what, 7 or 8 months of savings to pay rent and your staff, yourself, and your mortgage," said Ballance.

"I think they're (Cooper) looking out for any way to make it work and make it safe. But, I don't really see it realistically doing that much for us," Ballance said of the new order.

The owner of Durham's KingFisher is already seeing some success with the to-go drinks.

"This is maybe one of the first times it's felt like Kingfisher in a while," said owner Sean Umstead.

Umstead said the bar had bought to-go bottles in April, thinking it would happen sooner.

"It's been great. For as little time as we had to promote it. About 2 hours, we probably served 30-35 drinks," said Umstead.