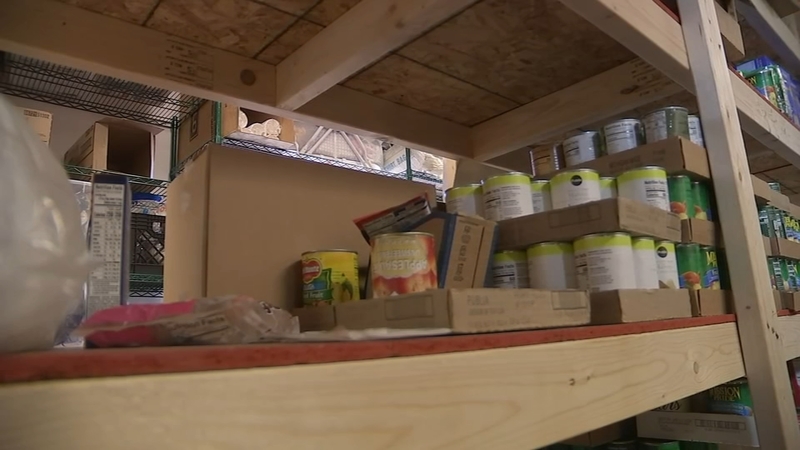 "We've seen probably four times the amount of requests on our food pantries (compared to) the previous years," said the Rev. Vance Haywood, who serves as pastor at St. John's Metropolitan Community Church in Raleigh.

The church, founded in 1968 with an intention to connect with the LGBTQ community, also serves as a food pantry and shelter site for those in need.

"We offer the food pantry, so we can help address some of the food insecurity. We do have the emergency shelter, and it's intentionally inclusive and open to anybody, and in particular to the queer community, so we can help provide some of that emergency relief just to make sure that folks are cared for and they can survive to the next day. But we're also trying to work with partners in the community and other organizations to make some larger systemic change that's necessary," said Haywood.

Data from the Census Bureau's Household Pulse Survey highlights the disparity in hunger rates among transgender people. Nationally, more than 17% of transgender people reported they sometimes or often did not have enough to eat, compared to 8% of the rest of the population.

In North Carolina, the disparity is even greater, with 47% of transgender respondents saying they faced food insecurity, compared to 12% of others; according to Feeding America, a nonprofit organization, about 14% of North Carolinians, including 20% of children in the state, faced hunger.

Candis Cox, a transgender woman who serves as the Vice Chair of the Board at the LGBTQ Center of Durham, says food insecurity stems from other problems.

While Cox believes societal shifts are needed to address long-term root causes of food insecurity, she believes there are steps that can be taken now to lower rates.

"We need to actually make access to all forms of aid something that is much easier. There's a lot less red tape. We need to make it so that people that are in need, all North Carolinians, have equal access to it," said Cox, who noted higher state unemployment benefits and improving request methods for emergency food as two suggested actions lawmakers should consider.

Within the transgender community, ethnic minorities face even greater disparities when it comes to food insecurity.

"It really boils down to access to aid and meeting people where they're at. Trans people of color, trans woman of color, in particular, occupy three different demographics that each have their own roadblocks," said Cox.

Haywood noted that while more churches in the area have made efforts to increase inclusivity, that's not the case for most areas of the state, making it difficult at times for vulnerable people.

"We've seen such an increase in need from the trans community in particular, the entire queer community. Before COVID, we had some small groups of trans folks that could come together and meet and talk and be amongst folks, and have that opportunity. COVID took a lot of that away. We were able to gather through Zoom and some other ways, but trust is a large factor and getting on to an online format, there's got to be some parameters put in place that are securing that space again and bringing the trust factor back. So we saw a huge number of trans folk reaching out and looking for connection, folks who fell into food insecurity, queer folks who are now faced with living conditions where they're forced into housing situations with (others) who don't accept them for who they are, and now they're in these dangerous situations. So we've seen that over the past two years," said Haywood, who also expressed concern over anti-LGBTQ rhetoric, specifically taking issue with remarks made by Lt. Gov. Mark Robinson.