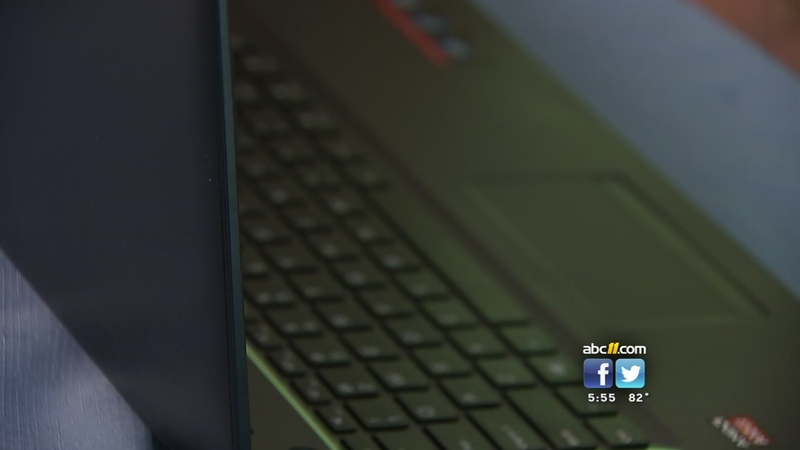 RALEIGH (WTVD) -- "Warning, your computer may have a virus."

Seventy-four-year-old Judy Wynn was using her laptop computer when this message popped up on her laptop. Judy panicked and called the number listed on her screen. Judy says the representative on the phone told her he worked with Microsoft and could take care of her problems.

Fixing her laptop, of course, came with a price.

While on the phone with the representative, Judy says he walked her through how to give him access to her computer. He then took control of her laptop and was even able to see Judy through her web camera. When it came time to pay for "fixing" her laptop, Judy says she was instructed to write a check, and she says the representative took a picture of it from the web camera.

Judy noticed several programs downloaded onto her computer and she thought everything was good until she got another call from someone claiming to be Microsoft.

She says this time they told her the virus so bad that someone could take everything she owned. She says the price to fix it, $2,500. She paid, but then the red flags.

Luckily she got in touch with me just in time to call her bank and put a stop to the checks she wrote. I also told her to turn off her computer as the representative still had access to it.

I went to Judy's house and called the company who claimed to fix her computer. The representative said they didn't do anything wrong.

"We ask them whether or not they are ready to give us access to their computers," said the representative on the phone, "They do that willingly, and we don't unnecessarily charge anything."

The representative claimed that they had rightfully helped the situation, and Judy gave permission for all of it.

Judy gets help from the Computer Repair Doctor.

Schoeffler says he found several programs on the computer that Judy didn't need.

"They put programs on there to 'help' your computer, but you have a newer computer, you don't need anything like that to get it back up and running," Schoeffler explained to us.

He also shared with us that it was good Judy turned her computer off when she did. Had she not, he said, "They could get access to everything, your credit card, anything you have saved on your computer, all your pictures. All that stuff has value on the internet because they can sell it."

Judy gets help from the Computer Repair Doctor.

Schoeffler says the best option for Judy was to wipe her computer completely clean. This brings it back to factory settings and uninstall any program that she does not need. Luckily, the techs at Computer Repair Doctor were able to save all her documents and pictures. Judy's computer is now up and running and she couldn't be happier.