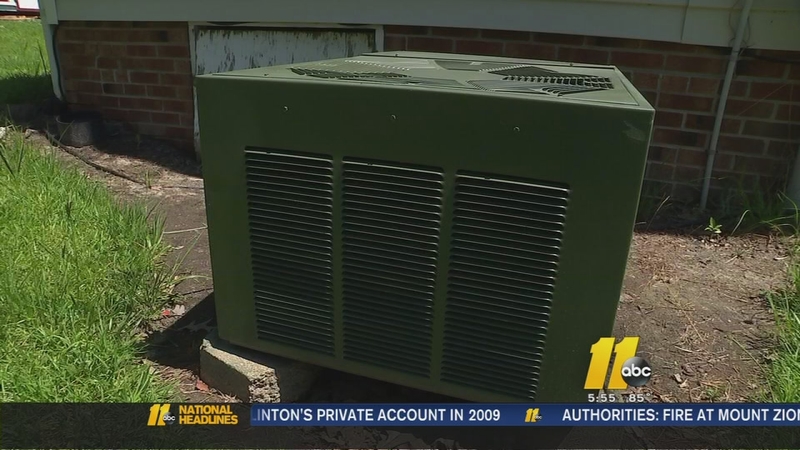 SMITHFIELD, N.C. (WTVD) -- As the summer temperatures rise, the last thing anyone wants to deal with is a broken air conditioning.

Unfortunately, that was the situation that a Craigslist handyman left several Triangle homeowners in.

Four different homeowners contacted me saying they paid for AC repair from a man named John McNerney, but said he didn't do what they contracted him to do.

Sabrina Sanders has been without a working AC for more than a month. She reached out to McNerney when her 17-year-old unit broke down and he promised to install an affordable working used unit for just $1,000.

"He said he had a four year old Goodman in great condition and it would still have the warranty on the unit," she said.

This seemed like a good deal to Sabrina who was saving up for a new unit, which can cost up to $6,000.

McNerney picked up the unit and, while Sabrina was at work, he called her and told her he was installing the Goodman unit, but she said that's not what she found when she went to check on the unit.

"When I got home, there's this unit out there that has been painted," She said. "The rocks around it are painted as well so you know he painted it there and he took the logos off he took the labels off so we couldn't identify it as our unit."

With a closer look at the serial numbers on the bottom of the unit though, she was able to identify it as her old unit just painted a different color. She said there weren't any new parts inside either.

"He just sold us our machine and it still doesn't work," she said.

When she realized she had her old unit, Sabrina called McNerney who then came back and put Freon in it, but the unit still didn't work.

Though a series of text messages, McNerney agreed to refund her $500, but Sabrina said she never received the money.

"We communicated for three days," she said. "He's like 'I got this to do. I've got that to do,' and eventually I never heard from him again."

Meanwhile, McNerney is still advertising his services on Craigslist, claiming more than 20 years of experience in building and repairs and boasting prices under $50 for labor.

Sabrina decided to strike back by putting up a warning on the website as well.

When I reached out to McNerney on the phone, he denied not doing the work on Sabrina's unit though he admitted that the unit was the original unit but he says the compressor inside is new.

When I asked him why the unit still has its original serial number and why he had painted it, he said that he had to go because he was walking into the doctor's office and he would call me back. I never heard back from him.

When looking for HVAC repairs, my advice is to look for a reputable technician with a license to do this kind of work and always ask for the old parts back, to prove that new parts are being installed.