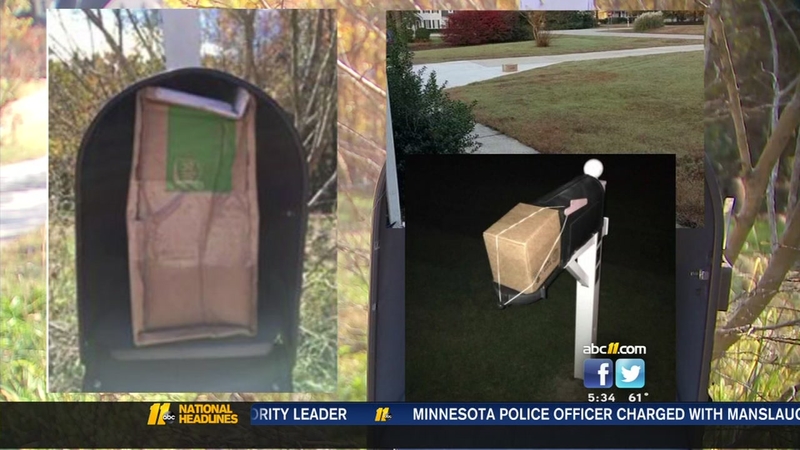 RALEIGH (WTVD) -- Residents in the Waverly Point subdivision are saying mail service has been subpar since the summer. The subdivision sits on the border of Wake and Johnston counties and is in the 27603 ZIP Code.

Many residents reached out to ABC11 to share their frustration with the United States Postal Service. According to members of the community, mail has been delivered late, damaged, or not at all.

One recent weekend, mail was delivered as late as 3 a.m.

"This is ridiculous. This is just getting worse and worse," said resident Jody Calderone.

WATCH: USPS mail carrier for Waverly Point speeds off as I try to ask her why mail is delivered late, damaged, or to wrong address. #ABC11 pic.twitter.com/2BNOObJJZd

She lives on Natalie Road and regularly receives mail late, and on one recent account, damaged.

"The mistakes that are going on, they are critical," Calderone told ABC11.

Neighbors say their long-time mail carrier, who was highly efficient, retired during the summer. And since then, service has been on the decline.

Many have also said they receive notifications from USPS saying their mail has been delivered, only to have it not in their mailbox or on their front porch.

On multiple occasions, they have found mail to be delivered the following day.

@DeJuanABC11 @ABC11_WTVD they purposely ran over my yard waste bag and no phone call back from them either. @USPS @USPSHelp pic.twitter.com/Nm7px66jBT

Several residents use Amazon Prime and are worried how service will affect Christmas delivery.

"I don't know if it's got delivered to the wrong place or if it's still sitting in the post office. Nobody can give us any answers as to what's going on with it," Whitaker said.

The Avent Ferry USPS, on Lake Dam Road in Raleigh, services the 27603 ZIP Code. The post office, according to Google Maps, is more than 20 miles from the Waverly Point subdivision.

AHEAD AT 5:30: Would you be mad if your mail was delivered like this? Waverly Point residents say this is unacceptable. #ABC11 pic.twitter.com/jMd5qzOREY

Whitaker says he reached out to USPS and received the following voicemail:

"My name is (inaudible) and I'm calling from the United States Postal Service Consumer Affairs Department. This call is to inform you the station manager is aware of the mail delivery issues that we are having in the Raleigh area. And we are addressing this matter. I do apologize for any inconvenience. And you have a great day."

ABC11 also reached out to the Avent Ferry location but our call went unanswered. An inquiry to USPS Corporate was also made and ABC11 received the following response:

"The Postal Service strives to deliver mail safely, timely and in the best possible condition. Due to mail volume increases during the fall and over the Veterans Day holiday, some mail was delivered later than normal. We have addressed issues related to mail volume increases. We apologize for any inconvenience and encourage customers with questions about mail service to call us at (336) 668-1307."

ABC11 followed up with USPS Corporate for a more detailed response that addresses the issues Waverly Point residents are having. So far we have not received a reply.

Residents in Durham and Cary have also contacted ABC11 to express their frustration with the level of service they're receiving from USPS.