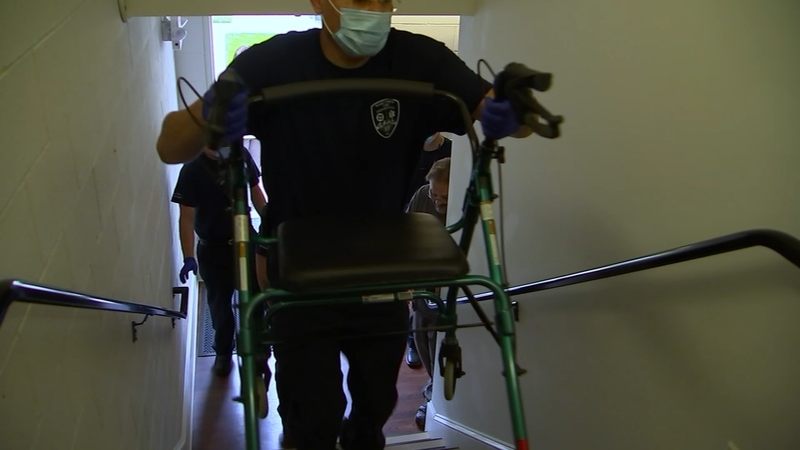 WAKE FOREST, N.C. (WTVD) -- Dozens of Wake Forest residents are stuck without working elevators and a fire alarm system for days after a lightning strike at the Huntington Springs Apartments.

They are apartments are for residents fifty-five and older, and many of the residents are disabled and not able to walk the stairs. With no timetable for repairs and desperate for relief, they reached out to Troubleshooter Diane Wilson for answers.

"I'm on the fourth floor. It is hard getting down," resident Daniel Wagenblast said.

Wagenblast uses a walker to get around and can't walk the stairs on his own. He needs to call Wake Forest Fire Department and firefighters respond to his call and help him get up and down the stairs so he can get to his dialysis appointments.

"I did miss Tuesday because I didn't know that the elevators weren't working," Wagenblast added.

Unable able to miss any more dialysis appointments, Wagenblast says having the firefighters help is the only way he can get up and down the four flights of stairs each time he needs to leave his apartment.
Not having working elevators isn't just a problem for Wagenblast, but also for Marcia Walker who gets around with a scooter.

"I want the elevator to get fixed because I canceled all of my doctors' appointments but one," Walker said.

Another resident who lives on the fourth floor showed Wilson the bruises she has after she says she fell after walking down the stairs from her apartment.

"I was weak because I got problems with both of my feet, so I was very, very weak."

Besides no working elevators, an even bigger problem was the lightning strike that knocked out the fire alarm system to the whole building.

A representative with the Wake Forest Fire Department was on site at the apartment complex and informed management at the complex; they must have staff walking the halls twenty-four hours a day on fire watch until the alarm system is fixed.

The operations manager over the apartment complex confirmed they've had someone on fire watch since the lighting strike and the repairs to the fire alarm system are delayed due to a supply issue with parts. She added while they do have the parts to fix the elevators, without a working fire alarm system, she says they can't run the elevators.

On Friday, residents received a letter from management over Huntington Springs Apartments that explained they've taken a two-step approach to fix the issues. The first is sending the main panel out for repairs which should take between ten to fifteen days. It also explains they've also ordered a new panel, but due to supply issues with chip shortages six-plus months to come in. The letter states, that it's their hope the repair will allow the system to be repaired and the elevators operational.

According to the letter, if the timeframe of the repairs is too much of a hardship on residents and they need to temporarily leave, management will provide rent credit from the day the resident leaves until the day they return. The letter also gave residents resources to reach out to within the community if they need assistance.